"What difference, at this point, does it make?" Clinton shouted, seemingly losing her cool.... 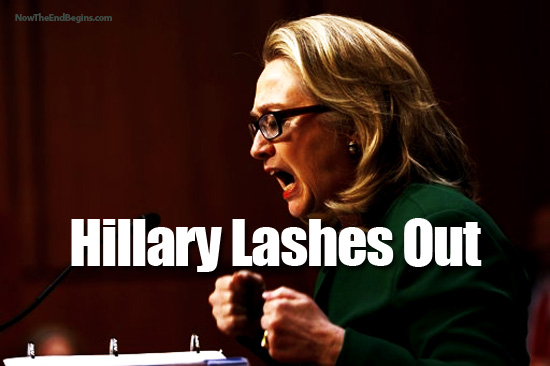 RELATED STORY: Refresh your memory with our Benghazi Coverup Archive

Editor’s note: It is now well over 4 months since the attack by Muslim terrorists on the American consulate in Libya which killed 4 Americans on September 11, 2012. The Obama administration has done NOTHING to avenge their deaths. The Muslim terrorists responsible for this action remain free and open on the streets of Libya today. This is the ‘new America’ that Obama has created where Islamic terrorism goes unmet and unpunished.

From Weekly Standard: Secretary of State Hillary Clinton was asked about ascertaining whether the Benghazi terror attack was the result of a protest by Senator Ron Johnson. “What difference, at this point, does it make?” Clinton shouted, seemingly losing her cool.

“With all due respect, the fact is we had four dead Americans. Was it because of a protest or was it because of guys out for a walk one night decided to go kill some Americans? What difference, at this point, does it make?”

“For me, this is not just a matter of policy, it’s personal,” said Clinton, holding back tears. “I stood next to President Obama as the Marines carried those flag-draped caskets off the plane at Andrews. I put my arms around the mothers and fathers, sisters and brothers, sons and daughters. It has been one of the greatest honors of my life to lead the men and women of the State Department and USAID. Nearly 70,000 serving here in Washington and at more than 275 posts around the world. They get up and go to work every day — often in difficult and dangerous circumstances thousands of miles from home — because they believe as we believe the United States is the most extraordinary force for peace and progress the earth has ever known.” source – Weekly Standard

From Daily Caller: WASHINGTON — Republican Sen. Rand Paul said Secretary of State Hillary Clinton had been negligent in conducting her job, and said that if he were president, he would have relieved her of her post. Paul said that the fact that she was not aware of the requests of more security for the U.S. Embassy in Libya constituted “a failure of leadership” and said it was inexcusable.”

“I think ultimately…you accept the culpability for the worst tragedy since 9/11,” Paul said.