A stretch of China's longest river has abruptly turned the color of tomato juice, and officials say they don't know why. Residents of the southwestern city of Chongqing first... 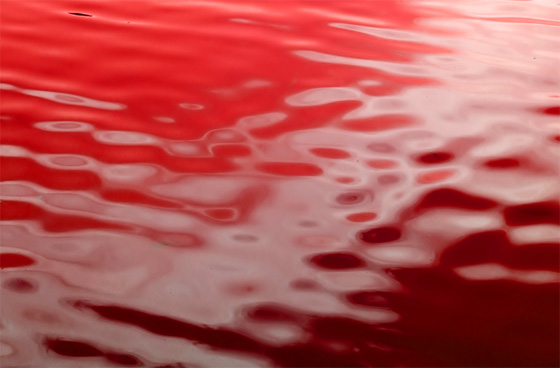 “And the second angel sounded, and as it were a great mountain burning with fire was cast into the sea: and the third part of the sea became blood;” Revelation 8:8

A stretch of China’s longest river has abruptly turned the color of tomato juice, and officials say they don’t know why. Residents of the southwestern city of Chongqing first noticed that the Yangtze River, called the “golden waterway,” had a spreading stain on its reputation yesterday (Sept. 6).

Though the bright-red water was concentrated around Chongqing, Southwest China’s largest industrial center, it was also reported at several other points along the river, according to ABC News.

Investigators have yet to determine a cause, but the Telegraph reports that environmental officials are considering industrial pollution and silt churned up by recent upstream floods as possible sources for the color.

One natural explanation for red water that can likely be ruled out is color-producing microorganisms, according to Emily Stanley, a professor of limnology (the study of inland waters) at the University of Wisconsin. “When water turns red, the thing a lot of people think of first is red tide,” Stanley told Life’s Little Mysteries. “But the algae that causes red tide is a marine group and not a freshwater group, so it’s highly, highly unlikely that this is a red-tide-related phenomenon.”

Fresh water does occasionally turn blood-red for biological reasons (a lake that turned red during a drought in Texas last summer led to talk of the end times), but Stanley said this is most often due to incursions of color-producing bacteria that arrive when a body of water has less oxygen than normal. Because rivers move constantly, struggling and mixing with the air above them as they go, they rarely ever get the oxygen deficiencies necessary for a life-based red dye job.

After reviewing a few images of Chongqing’s shockingly red river, Stanley put her money on a man-made cause.

“It looks like a pollutant phenomenon,” she said. “Water bodies that have turned red very fast in the past have happened because people have dumped dyes into them.”

An industrial dye dump was in fact the explanation when an urban stretch of another Chinese river, the Jian, turned crimson last December. Investigators traced the color back to a chemical plant that they said had been illegally producing red dye for firework wrappers.

Still, Stanley says she can’t rule out the other possibility officials are now reportedly investigating: an upstream influx of silt. Her instinct, though, is that red clay would be more likely.

“China is well known for having areas with a lot of steep hill sides and a lot of land use practices that promote soil erosion and soil going into rivers,” she said. “You can get red-colored clays that wouldn’t be a whole lot different from having a big dose of dye go in there. But if that’s the cause I’d imagine there would have had to be a huge storm or a huge amount of clay go into the system.”