The owners of Baltimore’s Sports Mart in Mondawmin Mall released surveillance video of ‘hundreds’ of looters rampaging through the family-owned business Monday night.... 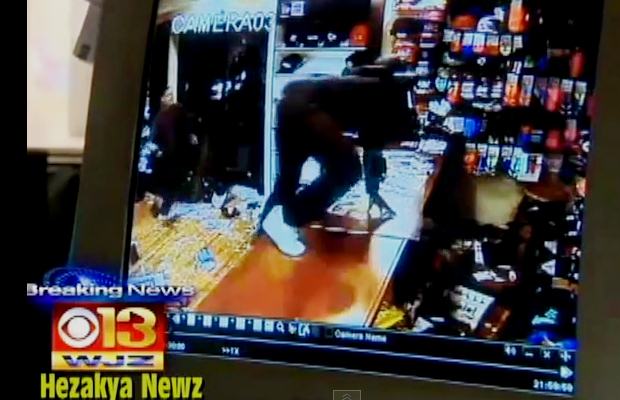 “We’re a community-based store, and the community took care of us last night. They wiped us out,” said Brian Levy.

During the recent race riots in Baltimore, reports have been coming in that  black-owned businesses were protected from the looters by street gangs. Crips, Bloods and Black Guerilla Family gang members reportedly stood guard in front of some black-owned businesses to protect them from would-be looters and arsonists. Instead, the criminals were directed to businesses owned by Arabs and Chinese, according to The New York Times.

The owners of Baltimore’s Sports Mart in Mondawmin Mall released surveillance video of ‘hundreds’ of looters rampaging through the family-owned business Monday night.

The above video shows Black men and women pouring in to the store and stealing everything in sight. The owners of the store are white. WJZ-TV in Baltimore aired the footage and interviewed the owners. They said the store was cleaned out–including the safe which was found in the street a block-and-half-away.

Looters in the Ferguson race riots last year were never brought to justice, and from the looks of things, no one will be prosecuted for anything here in Baltimore, either. So the time has come to send a message, a financial message, that will reverberate through the deserted streets of the city long after the riots have subsided.

Every, single business owner that was robbed and looted during these staged demonstrations should take the insurance money and leave the city of Baltimore immediately. Don’t waste your time trying to rebuild in a corrupt, inept town like Baltimore. It’s only going to happen again, the George Soros funded Liberals will make sure of that. Obama and his minions want racial unrest, they want violence in the streets, they want another Civil War. But you have the power to take that prize away from them. Leave. Go somewhere that people will appreciate you and the police will actually protect you.

Abandon Baltimore until the only people left are the criminals and the politicians. No one will be able to tell the difference, anyway.

Send a non-violent message of protest that will actually accomplish something. Be part of the solution and get out.