Farrakhan's placing of Gadhafi among the pantheon of historical African liberation figures was not simply a case of racial idolatry and hero worship. It was also a case of... 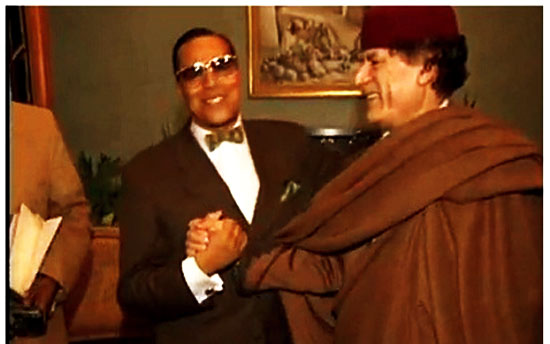 The color of money

Nation of Islam leader Louis Farrakhan got right to the point in his 2009 Savior’s Day keynote address. He opened by calling it a great honor in his words to welcome “brother” and “leader” Muammar Gadhafi. The occasion was Gadhafi’s first visit to the United States. He was there to address the 64th opening session of the United Nations.

Farrakhan was just getting warmed up with his effusive introduction of Gadhafi. He spared no words in branding Gadhafi the second coming of Marcus Garvey, Kwame Nkrumah, George Padmore and Gamel Nasser. These are the men that Farrakhan regards as the genuine and authentic African and Arab freedom fighters who opposed the evils of colonial and imperial rule.

But Farrakhan’s placing of Gadhafi among the pantheon of historical African liberation figures was not simply a case of racial idolatry and hero worship. It was also a case of hard headed business and political pragmatism. Farrakhan didn’t try to hide it in his speech. He boasted that Gadhafi had shelled out $3 million to the Nation of Islam — then under the tutelage of Elijah Muhammad — in 1971 to buy and renovate a Greek Orthodox Church that became the Chicago based national headquarters of the organization.

Gadhafi’s largesse didn’t stop there. He chipped in $5 million more later for the group’s unnamed “economic development” programs. Farrakhan took pains to note that Gadhafi didn’t ask for a penny of the money back.

In later years, Gadhafi forked over more dollars to Farrakhan to host conferences and to bankroll his globe-trots through dozens of countries before and immediately after the Million Man March in 1996. Farrakhan shrugged off the criticism at the time that he was a bought and paid for front man for a global terrorist, and that he was cavorting with and praising dictators on his stops in countries with some of the most abominable human rights records on the planet, and Libya was right there in their ranks.

In the decade since his Libyan fronted tours, Farrakhan has repeatedly heard the same charges that while he rails at the U.S. government and European nations for their alleged racism, their colonial rule and continued support for murderous dictators, and hammers Israel for its treatment of the Palestinians, he has remained stone silent on the abuses of Gadhafi and other African and Arab dictators. This criticism hasn’t moved him one bit to utter a word against them and their practices. source – theGrio