When Muslims arrive in a new land, in America and elsewhere, they are small in number and they keep to themselves. But as their numbers grow, they begin to... 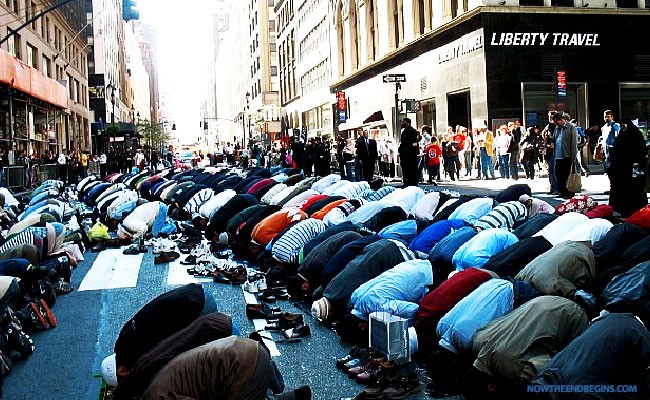 This is what it looks like when Muslims take over a host nations city, and it will soon happen here in America

“And when We wish to destroy a town, We send Our commandment to the people of it who lead easy lives, but they transgress therein; thus the word proves true against it, so We destroy it with utter destruction.” Qu’ran 17:16

My dad’s people arrived as immigrants here in 1723 from Holland, my mom’s dad arrived here on Ellis Island from Scotland in 1923. In both cases, they blended into American life and did their level best to be law-abiding citizens, pay their taxes, and raise their children. While maintaining their pride in their birth countries, they assimilated into their newly-adopted homeland and eventually became Americans. That’s what nearly all immigrants from other lands do when they arrive here, with the exception of a lone, single group who do not assimilate into their host country. And who might that be? The Muslims.

When Muslims arrive in a new land, in America and elsewhere, they are small in number and they keep to themselves. But as their numbers grow, they begin to make demands in their towns and cities that local customs change to accommodate their Islamic beliefs. They will protest and demand that restaurants stop serving bacon, they will run “street patrols” like they do in England harassing and attacking local women not wearing the Muslim hajib. At first, they are merely an annoyance, until their numbers grow, then they become a threatening mob capable of great destruction. The people of Luton in England have had their entire town taken from them by Muslim immigrants.

When Muslims begin to arrive in large numbers, they are there to seize control of that area

Why do Muslims do this? Because their Qu’ran tells them to, in whatever host country they find themselves, to “claim that land” for their god Allah. Read for yourself quotes from various Muslim leaders as to why they want to take over their host nations, it will be most enlightening:

This is what it looks like when Muslims take over a host nations city, and it will soon happen here in America

When Muslims grow in numbers in any nation outside their own, they demand that their host country become Muslim and adopt the Satanic Sharia Law. England today is a nation on the verge of a complete collapse from Muslim immigration. Think it can’t happen here? It already is.

Author Steve Tarani said during a presentation in Nashville that he has witnessed the alleged “no-go zones” — areas where police cannot enter — while shadowing a friend who serves on the Detroit Metro SWAT Police on a drive in Dearborn, MI. He described pulling up to one of the alleged Muslim-controlled areas:

The street signs suddenly went from English to Arabic. There wasn’t a single English word on any shop or any street sign. And in fact, these little yellow signs were posted all along the edges. Jeremy said to me, ‘this is it. We don’t go past this line.’ And I said to Jeremy, ‘what do you mean? You guys are Detroit Metro. You’re the SWAT team. You can go anywhere you want. What if you get a call over there?’ He said ‘this is it, it’s hazardous for our team if we go past this line.’

I have seen it with my own eyes, witnessed it in the backseat of a car and it is for real. No-go zones exist in the United States.

Dearborn, Michigan is not the only place that these settlements exist. They are spread out over the country in various cities. There’s an estimate of over 5,000 known terrorist cells in the United States. However our most persistent and significant threat, right now, to us here today this morning, is the homegrown violent extremists.

The Terrifying Results of Muslim Immigration in the UK

To put these numbers into perspective, this means that every year the U.S. admits a number of Muslim migrants larger in size than the entire population of Des Moines, Iowa; Lincoln, Nebraska; or Dayton, Ohio.

The greatest threat America faces in 2015 is not from “radical” Muslim extremism, but from regular old, everyday, “moderate” Islam. It is happening here right now, in every small town across America. It will be the death of our nation if it is not stopped. England 100 years ago was a Christian nation so peaceful that the police didn’t even need to carry guns.