The IAF struck two terrorist sites in the Hamas-enclave of Gaza on Saturday, in response to the barrage of attacks emanating from the terror stronghold on Friday. Video... 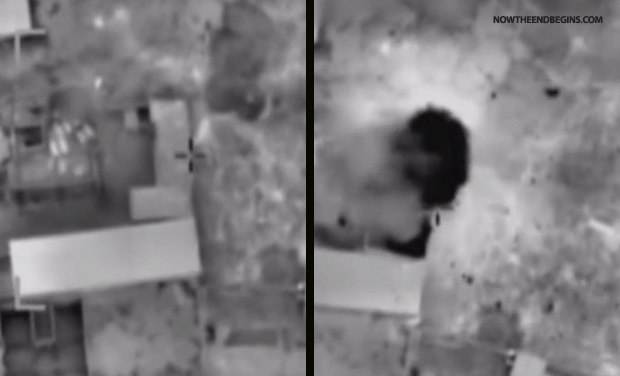 The proper way to treat terrorists in your midst

We have gotten so used to the Obama administration’s pusillanimous, pro-Muslim responses to terror attacks that we have forgotten how a real leader of a free nation is supposed to act. Prime Minister of Israel Benjamin Netanyahu gave a master class this weekend on how to deal with terror attacks, I wonder if Obama came off the golf course longer enough to watch.

Israel National News reports today that the IAF struck two terrorist sites in the Hamas-enclave of Gaza on Saturday, in response to the barrage of attacks emanating from the terror stronghold on Friday. Video of the strikes, which leveled a weapons manufacturing plant and a weapons storage cache in Gaza, was released by the IDF Spokesperson Unit on Saturday night.

“In response to the six rockets and two mortars fired at Israel earlier this evening, an IAF aircraft targeted two terror activity sites, a weapons-manufacturing facility and a weapons-storage facility in Gaza,” read an IDF statement on the airstrike.

“Direct hits were confirmed. Gaza terrorists have fired over 30 rockets at southern Israel during the past two weeks alone,” concluded the statement.

The rocket fire from Gaza has escalated since Hamas terrorists kidnapped three Israeli teens on June 12. On Friday, the Iron Dome anti-missile defense system intercepted two rockets, just hours after a barrage of three rockets exploded in the Eshkol Regional Council, and a mortar shell was fired as well.

Ahead of the rockets, the IAF conducted an airstrike, targeting a car in Gaza and killing two terrorists who were involved in the rocket escalation. CCTV video footage from Gaza apparently captured the targeted airstrike on film.

That IAF strike followed attacks emanating from Gaza on Friday morning, when a bomb exploded near troops manning Israel’s security fence. The blast went off as an IDF patrol passed through the area, in what apparently was a targeted attack.

Despite the IAF airstrikes in response to the attacks, Gaza terrorists on Saturday night again launched two more rockets, setting off a massive fire and explosions in a plastic and paint factory in Sderot that was directly hit by one of the missiles.