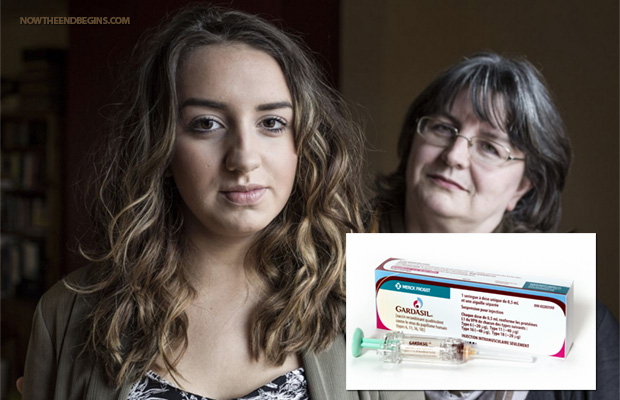 “‘I had severe chest and abdominal pains, and breathing difficulties – one time, I couldn’t move anything on one side of my body'” – Emily Ryalls, age 17

When Caron Ryalls was asked to sign consent forms so that her then 13-year-old daughter, Emily, could be vaccinated against cervical cancer, she assumed it was the best way to protect Emily’s long-term health.

Yet the past four years have turned into a nightmare for the family as Emily soon suffered side effects. Only two weeks after her first HPV injection, the teenager experienced dizziness and nausea.

“The symptoms grew increasingly worse after the second and third injections, and I went to A&E several times with severe chest and abdominal pains as well as difficulty breathing,” Emily, now 17, said. “One time I couldn’t move anything on one side of my body. I didn’t know what was happening.”

Emily is one of the thousands of teenage girls who have endured debilitating illnesses following the routine immunisation. She is yet to recover and has no idea when her health will return to normal.

“Prior to the vaccination Emily had an ‘unremarkable’ medical history with no problems,” said Mrs Ryalls, 49, from in Ossett, West Yorkshire. “She was considered very healthy and represented the school at hockey, netball, athletics and was a keen dancer. She was also a high achiever at school, in the top sets for everything and predicted at least 10 GCSE with high grades. Her future was very bright.”

In the HPV category alone, ADRs numbered 8,228, of which 2,587 were classified as “serious” – defined by several criteria, including whether it resulted in hospitalisation or was deemed life threatening.

The MHRA said that the figures did not reflect the true amount of ADRs because of an “unknown and variable level of under-reporting”. The agency estimates it receives about 10 per cent of all reports, suggesting the actual number of girls suffering ADRs could be tens of thousands. It also said that “many millions” of the vaccinations were administered in this time frame without any problems reported.

“Every visit to a doctor was met with rolled eyes,” said Mrs Ryalls. “Every mention of the HPV vaccination was met with hostility and ridicule. We were eventually referred to a local paediatrician who told her to push herself to get back to normal – ‘We all feel tired in the mornings, Emily’ was one of the remarks regarding her complete exhaustion.”

Two years after falling ill, Emily was eventually referred to Dr Pradip Thakker at Queens Medical Centre in Nottingham; he used a tilt table test to diagnose PoTS (postural orthostatic tachycardia syndrome), a condition where moving from lying down to standing up causes an abnormally high heart rate. By this time Emily was able to manage only three to four hours of school a week. Mrs Ryalls, who had built up a small publishing company from scratch, was forced to close it and become Emily’s full-time carer. source