Tempers are flaring over a version of the American flag flying in Lake County. A veterans group says the flag is an outrage. "Joseph Stalin, pictures of Mao, pictures... 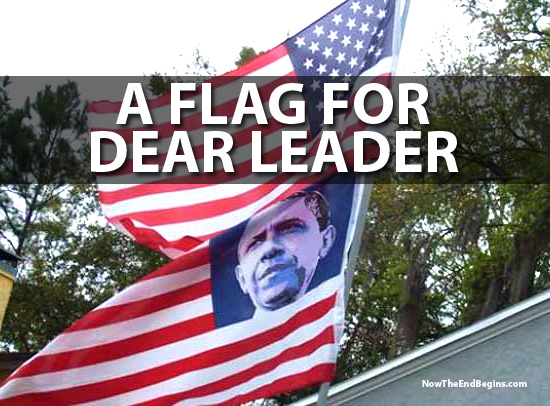 LAKE COUNTY, Fla. — Tempers are flaring over a version of the American flag flying in Lake County. A veterans group says the flag is an outrage.

Now y'all know where THIS is heading....O-Ba-MAO!

The flag, which features a picture of President Obama, was taken down Tuesday afternoon.  Korean war veteran Don Van Beck said his blood was boiling.

“I can’t describe how upset was because you just don’t do that to the American flag,” Van Beck said. Van Beck found it flying outside Lake County Democratic headquarters under the stars and stripes. Marine Corps vet John Masterjohn was seeing red.

“Joseph Stalin, pictures of Mao, pictures of Adolph Hitler. The pomp, the ceremony — the flags like that,” Masterjohn said. Nearly a dozen veterans went to the door and aimed to take it down.

“If you’ve been a veteran and fought — and some died for this flag — you don’t want to see it desecrated. That’s how simple it is,” Van Beck said. source – WFTV