Arizona resident Adam Smith thought he was doing good by taking a video of himself confronting a Chick-fil-A employee in the drive-thru lane Wednesday. But he was very mistaken.... 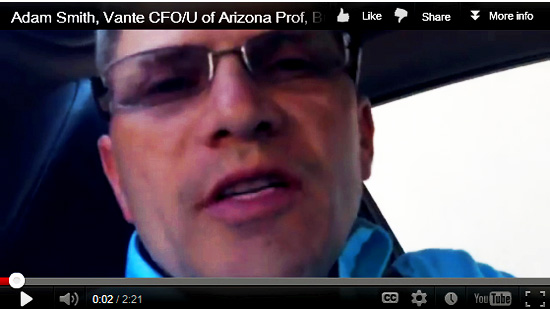 Hey Adam, was it really worth losing your CAREER for?
by Geoffrey Grider August 3, 2012
NOW THE END BEGINS SHARE:

But it was such a good idea at the time

Arizona resident Adam Smith thought he was doing good by taking a video of himself confronting a Chick-fil-A employee in the drive-thru lane Wednesday.

Hey Adam, was it really worth losing your CAREER for?

“Chick-fil-A is a hateful company,” Smith said to the employee in the video, which is still up on YouTube under multiple accounts. To watch the videos, click here.

But his employer, Tucson medical equipment manufacturer Vante, saw it differently. Vante has announced that Smith, formerly the chief financial officer and treasurer, no longer works there.

“We respect the right of our employees and all Americans to hold and express their personal opinions,” said a statement from the company. “However, we also expect our company officers to behave in a manner commensurate with their position and in a respectful fashion that conveys these values of civility with others.”

The video shows the Chick-fil-A employee responding to Smith’s statements by saying, “I’m really uncomfortable that you’re video taping,” and, “It’s a pleasure to serve you, always.”

Smith said that by taking free water from the Chick-fil-A drive thru, he hoped he was taking money away from hate groups.

“I don’t know how you stand it,” Smith said to the employee. “This is a horrible corporation with horrible values.”

After the employee wished Smith a nice day, he responded, “I will. I just did something really good. I feel purposeful.” An account for Vante Chief Financial Officer Adam Smith is no longer available on professional networking site LinkedIn. source – LA Times