The U.S. Navy research laboratory says the blimp is a government research airship conducting aerial mapping, and that the MZ-3A lighter than air blimp began roaming above the D.C.... 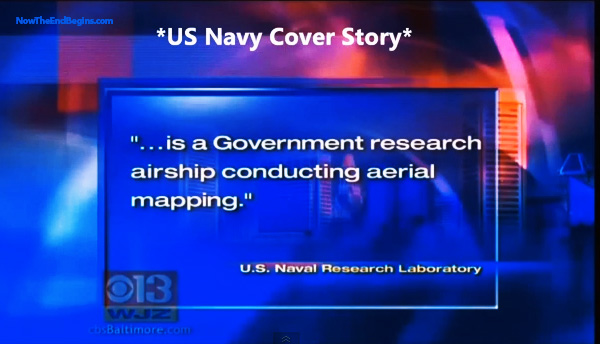 Germany, as a nation, watched as Hitler slowly rose to power. At each step along the way he left open clues for whoever was watching and paying attention to see what was truly going on. Hitler wrote nearly his entire manifesto for what he planned to do to Germany in his ghost-written book Mein Kampf. Then the curtain rose, and Nazi Germany was born, seeminly out of nowhere.

In Obama’s America in 2013, there are the same ample and open clues for those who war watching and paying attention. The blimp now hovering over Baltimore, Maryland is doing aerial mapping for FEMA Region III.

Just remember this: Hitler’s concentration camps were not something he readily admitted to. Every step along the way he denied, denied and denied as the souls of over 11,000,000 people perished in them. The America government will deny, deny and deny the coming FEMA Camps every step along the way right up to the very moment YOU find yourself living in one, waiting to be executed.

BALTIMORE (WJZ) — You may have noticed an unusual sight over the Baltimore area in the last few days—a Navy balloon hovering in the sky. Christie Ileto explains what the blimp is doing. 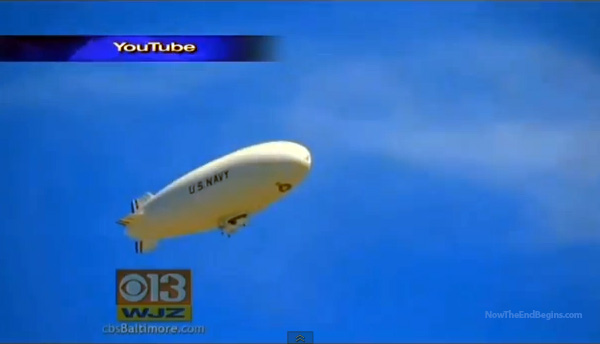 The Navy is conducting aerial mapping over Baltimore, and it’s caught the eye of many residents far below.

If you’ve looked up lately, you may have spotted a U.S. Navy blimp hiding in the clouds, or hovering over Baltimore’s harbor on clear sunny days.

“I’ve been seeing it all week. Like, every day,” said Ashley Bradley. Almost 200-feet long, it’s flying over Baltimore.

“Me and my friends were actually talking about it and wondering what it was,” Bradley said.

“I was coming down 95 and I was like, ‘what is with that blimp?’” said Dennis McGill.

The U.S. Navy research laboratory says the blimp is a government research airship conducting aerial mapping, and that the MZ-3A lighter than air blimp began roaming above the D.C. area on September 21 and can remain stationary for more than 12 hours.

The blimp is mapping in the flight restriction zones around Washington D.C. It includes places like the Department of Agriculture and at some of ourmajor airports like BWI.

YouTube video even shows the blimp propelled by two 180 horsepower engines, landing as far west as the Frederick Municipal Airport.

The “Baltimore Blimp” as it’s being called online has even sparked Twitter discussions. People want to know what it’s doing in the sky—others are just “blimp watching.”

“Usually when they have a football game or something you see a blimp. But this one was, like, way high,” McGill said. But the blimp won’t be up for much longer. The research lab says after October 5, it’s flying away.

When the mission is complete, pilots will fly the blimp north to a base in New Jersey. Right now, it is stationed at the Naval Air Station in the Patuxent River. source – CBS/Baltimore