One of Trump’s staunchest backers, Republic Senator Lindsey Graham, condemned the move as “short-sighted and irresponsible” and Senator Marco Rubio, another Republican, called it a “grave mistake that will have implications far beyond Syria.” “This is going to lead to the reemergence of ISIS, and the biggest winner of all this will be the Iranians, and that’s too bad,” Graham told Fox News in a phone call. Erdogan’s planned offensive aims to claim areas from Syria’s Kurdish militant YPG group and create a buffer zone inside Syria where he aims to settle many of the 3.7 million Syrian refugees currently residing in Turkey.

The Trump administration said the U.S. will stand aside when Turkey’s military launches an operation against America’s wartime Kurdish allies in Syria, a significant shift in American policy that raises questions over the fate of thousands of Islamic State detainees.

To be honest, I don’t like this one bit. Turkey under the regime of President Recep Tayyip Erdogan is a full-on Sharia state who I wouldn’t trust as far as I could throw him. Not only that, the Trump administration is going to allow Turkey to not only invade Syria but to then attack the Kurdish rebels who are our allies in the fight against ISIS. This is a very, very bad move, and I hope and pray that President Trump changes his mind before Turkey begins war in Syria.

“I will break also the bar of Damascus, and cut off the inhabitant from the plain of Aven, and him that holdeth the sceptre from the house of Eden: and the people of Syria shall go into captivity unto Kir, saith the LORD.” Amos 1:5 (KJV)

But as long as we are discussing Syria, it’s a good time to remind ourselves just how much Syria, Damascus and the the former and soon to be region of Assyria figure into end times Bible prophecy. The Bible says in Isaiah 10:5 that the Antichrist is called ‘the Assyrian’, Isaiah 17:1 says that Damascus will be destroyed, and Amos shows us that the entire land of Syria and the surrounding region will be one of the main battlegrounds in the time of Jacob’s trouble leading up the Battle of Armageddon.

FROM YAHOO NEWS: The Kurdish-led Syrian Democratic Forces have been a close U.S. ally in the fight to defeat Islamic State. But Turkey considers Syria’s Kurdish militants a threat to its national security and President Recep Tayyip Erdogan has said his forces were ready to begin a military operation against them in northeastern Syria imminently.

The decision represents a dramatic reversal for U.S. policy, which in 2015 provided air support for Kurdish militias to retake the critical town of Kobani from Islamic State and has since used Kurdish fighters as ground troops in the campaign to clear Syria of the group.

The shift could cast further doubt on the reliability of the U.S. in the region, in the wake of policy about-faces including walking away from the 2015 Iran nuclear deal that was painstakingly negotiated with allies who remain committed to the agreement.

As I have stated strongly before, and just to reiterate, if Turkey does anything that I, in my great and unmatched wisdom, consider to be off limits, I will totally destroy and obliterate the Economy of Turkey (I’ve done before!). They must, with Europe and others, watch over…

Trump defended Monday his desire to end America’s so-called “endless wars,” saying his country would fight only in it’s own interest. That sentiment has been welcomed by some, while leaving allies who rely on the U.S. security umbrella feeling nervous and exposed. An increasingly detached U.S. has also allowed rivals including Iran and Russia to pursue more aggressive foreign policies and expand their influence across the Middle East.

The 38th and 39th chapters of the prophet Ezekiel is where many students of prophecy get hopelessly tangled up because they have a lot of commonalities, but they also differ in many key aspects which prove they cannot be talking about the same war. It’s two different wars, separated by a minimum of 1,000 years. Let’s take a look and see what we find.

As recently as January, U.S. President Donald Trump had warned Turkey of economic devastation if it attacked Kurdish forces after a planned pullout of U.S. forces. A month earlier, Trump had abruptly announced his intention to withdraw all American troops from Syria, sowing confusion among allies and even American officials.

In the event, several hundred U.S. troops remained though, again, Trump is facing criticism for a decision that appeared to blindside the Kurdish forces on the ground.

One of Trump’s staunchest backers, Republic Senator Lindsey Graham, condemned the move as “short-sighted and irresponsible” and Senator Marco Rubio, another Republican, called it a “grave mistake that will have implications far beyond Syria.”

“This is going to lead to the reemergence of ISIS, and the biggest winner of all this will be the Iranians, and that’s too bad,” Graham told Fox News in a phone call.

Erdogan’s planned offensive aims to claim areas from Syria’s Kurdish militant YPG group and create a buffer zone inside Syria where he aims to settle many of the 3.7 million Syrian refugees currently residing in Turkey.

The president is seeking more than $26 billion in aid to build houses for about 2 million Syrian refugees he hopes to resettle. That would alleviate the burden on Turkey’s economy — and the criticism Erdogan has faced at home — at a time when a possible Syrian government offensive on the last rebel bastion of Idlib fuels fears of another wave of refugees heading north. 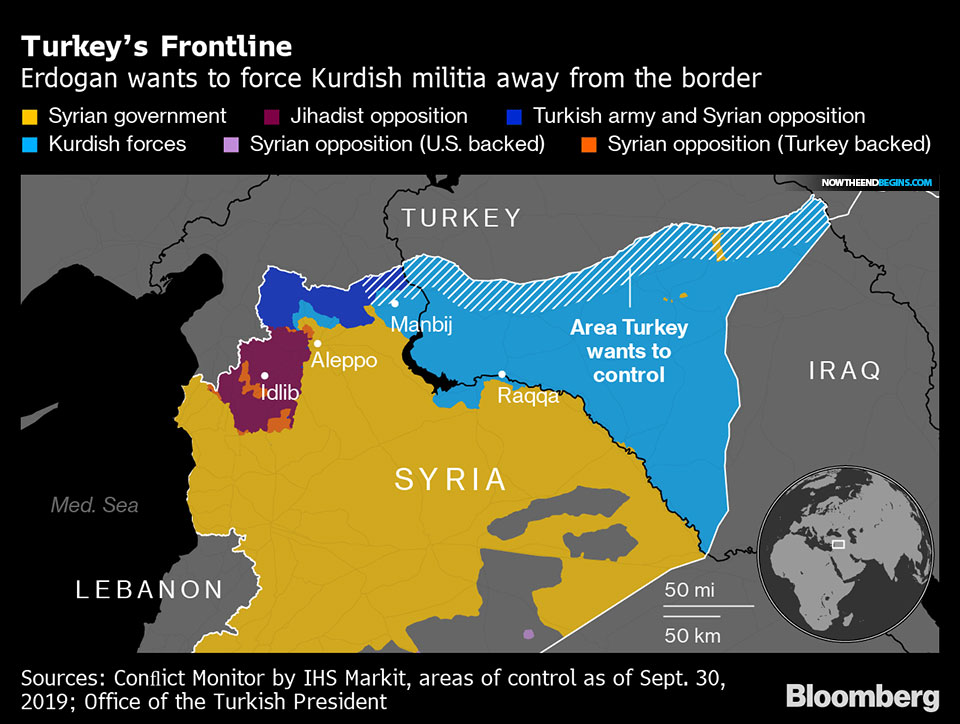 “The housing project envisaged by the Turkish authorities” is a “possible bonanza for Turkish construction firms close to the AKP,” Wolfango Piccoli, co-president at Teneo Intelligence, said Monday in a note, referring to Erdogan’s ruling party.

The market reaction to the news in Turkey was mixed. The lira dropped as much as 1.1% against the dollar, bonds fell, the cost to insure Turkish debt against default rose, and stocks gained 1.5%. Shares of cement maker Mardin Cimento headed for the biggest two-day gain in almost 20 years. The company has the closest cement capacity to Syria and is seen as a possible beneficiary of any Turkish led-construction drive.

What About ISIS and the Islamic State?

The Trump administration said Turkey would take responsibility for any Islamic State fighters captured in the area over the past two years. It gave no details and it wasn’t immediately clear what, if any, plan the NATO allies had agreed to handle the detainees or how they would be transferred to Turkish custody.

“United States Armed Forces will not support or be involved in the operation, and United States forces, having defeated the ISIS territorial ‘Caliphate,’ will no longer be in the immediate area,” the White House said in the statement released late Sunday after Trump spoke to Erdogan by phone.

For Ankara, the militant YPG is a mortal enemy because of its links to another Kurdish separatist movement that Turkey has been fighting for over three decades. The SDF, of which YPG is a key component, said via Twitter that a Turkish incursion would “reverse the successful effort to defeat” Islamic State. About 12,000 Islamic State militants and about 70,000 of their family members, who are currently in jails or camps, may be freed by “ISIS cells,” SDF said.

Erdogan said U.S. forces have started to withdraw from the border area following his phone call with Trump. Speaking at the airport in Ankara before his departure for Serbia, he said the number of Islamic State suspects in jails, including foreigners from Germany and France, are “exaggerated” and that a study was underway to determine steps to “speedily” process them. He did not elaborate.

Trump has characterized the U.S. military effort in Syria as a total victory, one that he has regularly touted on the campaign trail ahead of the 2020 election. At the same time, he’s insisted that the U.S. would bear no responsibility for any Islamic State detainees and gone so far as to threaten to release those fighters back to their countries of origin, which include several European nations whose governments have refused to take them.

“The United States Government has pressed France, Germany, and other European nations, from which many captured ISIS fighters came, to take them back, but they did not want them and refused,” the White House statement read. “The United States will not hold them for what could be many years and great cost to the United States taxpayer.”

Brett McGurk, a former U.S. envoy to the global coalition against Islamic State, said on Twitter that the White House statement “demonstrates a complete lack of understanding of anything happening on the ground.” READ MORE

In a major U.S. policy shift, American troops are pulling back to make way for Turkey’s planned invasion of part of northern Syria. Turkey is targeting U.S.-backed Kurdish fighters that have been key American allies in the fight against ISIS. The abrupt change follows a phone call Sunday night between President Trump and Turkey’s president. Holly Williams reports.