Iran's President Mahmoud Ahmadinejad on Wednesday joined the Chinese and Russian leaders in a rare encounter at a summit in Kazakhstan, where he launched a new attack on... 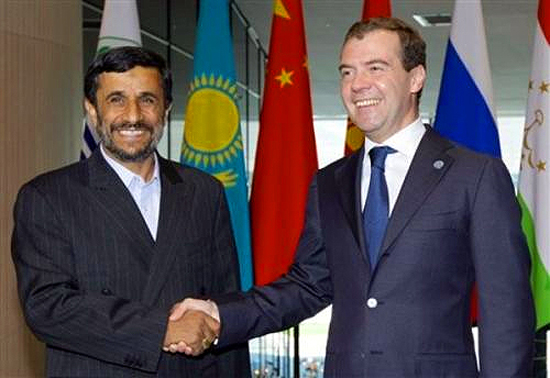 As it is written

Students and teachers of bible prophecy know all too well that these three nations – Iran, China and Russia – are part of the end times unholy alliance that wages war and comes against Israel. So when we see a story like this, we do well to pay attention regarding the nearness of the time.

ASTANA — Iran’s President Mahmoud Ahmadinejad on Wednesday joined the Chinese and Russian leaders in a rare encounter at a summit in Kazakhstan, where he launched a new attack on the “slavers and colonisers” of the West.

Host Kazakh President Nursultan Nazarbayev urged the Shanghai Cooperation Organisation (SCO), a security group regarded as a NATO rival founded in 2001, to take a more active role in ensuring regional security. But most attention was focused on Ahmadinejad, who was absent from last year’s SCO meeting in Tashkent after the UN Security Council agreed sanctions against Iran and was making a rare appearance at a big international meeting.

In a characteristically firebrand speech peppered with rhetorical questions, he launched a new call for a wholesale shake-up of the world order, which he said was “managed and run by slavers and colonizers of the past.” “I believe together we can reform the way the world is managed. We can restore the tranquility of the world,” he said.

Turning to his audience of ex-Soviet and Asian leaders he asked: “Have any of us used an atomic bomb against the defenceless citizens of any other country?” Returning to his past claims that a conspiracy could have been behind the September 11 attacks on the United States, Ahmadinejad added: “Have any of our countries played a part in the creation of 9/11 under whose pretext Afghanistan and Iraq were invaded and more than one million people have been killed or wounded?”

China urged Iran to participate in the six-party talks on nuclear energy and “take substantial steps in respect of establishing trust” and “speed up the process of dialogue,” the Chinese state news agency Xinhua reported. Tehran used to rely on Moscow as a dependable ally in its standoff over the nuclear programme but relations have rapidly deteriorated as Russia increased pressure on Iran after Dmitry Medvedev became president.

Medvedev and Nazarbayev were later to have a trilateral meeting with Ahmadinejad on the sidelines of the summit, a Kazakh diplomatic source who asked not to be named told AFP.

On the unrest shaking the Arab world, the member states agreed a declaration expressing concern about the instability but supporting “the drive of regional states in the path of democratic development in accordance with their specific cultural and historical characteristics.” source – Google News/AFP