The U.S. military wants to plant nanosensors in soldiers to monitor health on future battlefields and immediately respond to needs, but a privacy expert warns the step is just... 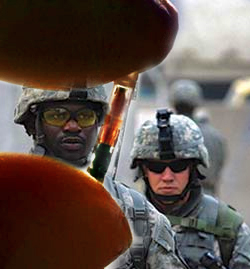 The U.S. military wants to plant nanosensors in soldiers to monitor health on future battlefields and immediately respond to needs, but a privacy expert warns the step is just one more down the road to computer chips for all.

“It’s never going to happen that the government at gunpoint says, ‘You’re going to have a tracking chip,’” said Katherine Albrecht, who with Liz McIntyre authored “Spychips,” a book that warns of the threat to privacy posed by Radio Frequency Identification.

“It’s always in incremental steps. If you can put a microchip in someone that doesn’t track them … everybody looks and says, ‘Come on,’” she said. “It’ll be interesting seeing where we go.”

According to a report at Mobiledia, the U.S. military’s Defense Advanced Research Projects Agency has confirmed plans to create nanosensors to monitor the health of soldiers on battlefields.

Albrecht said the move is another step in the trip down the road of having every person implanted with a chip that might very well monitor health but also other areas of life.

Microchipping, she said, already is “par for the course” for pets in many parts of the nation, and that acceptance will make it easier to require it for people.

She said it was expected that captive audiences, such as prisoners and troops, would be the first subjected to the requirement, which would make it easier for the general populace to accept it as well.

“It’s interesting,” she said. “I’m stunned how this younger generation is OK. They don’t see the problem. … ‘Why wouldn’t everyone want to be tracked?’”

But she said Americans will have to decide to say no to incremental advances, or by the time officials finally roll out the idea of chips for all, whether they want them or not, it will be too late to decide.

“The analogy that I draw is [that of a train], and if I’m in California and I do not want to wind up in New City, every stop brings me closer,” she said. “At some point I have to get off the train.”

Albrecht also has helped develop and launch a new project called StartPage, which now is handling some 2 million search requests per day.

The benefit of the page is its privacy. The site explains that every time a person uses a typical search program such as Google, “your search data is recorded.”

“Then they store that information in a giant database,” she explains.

As a result, corporate America and the government have access to “a shocking amount of personal information about you, such as your interests, family circumstances, political leanings, medical conditions and more

WND reported previously that owners of pets have reported cancer in their animals after microchipping.The report documented how a dog developed a highly aggressive cancer right at the point where a chip was embedded.

Albrecht told the story of another dog, a 5-year-old Yorkshire terrier named Scotty that was diagnosed with cancer in Memphis, Tenn. Scotty developed a tumor between his shoulder blades, in the same location where the microchip had been implanted. The tumor the size of a small balloon – described as malignant lymphoma – was removed. Scotty’s microchip was embedded inside the tumor.

Verichip, a major manufacturer of the microchip implants, touts the technology’s capability to identify a lost pet and enable its return home, while dismissing potential health risks.

“Over the last 15 years,” stated the VeriChip website, “millions of dogs and cats have safely received an implantable microchip with limited or no reports of adverse health reactions from this life-saving product, which was recently endorsed by the USDA. These chips are a well-accepted and well-respected means of global identification for pets in the veterinary community.”

WND also reported there were warnings about a radio chip plan that would allow identification of individuals by government agents simply by walking through an assembly.

REAL ID was a plan for a federal identification system standardized across the nation that so alarmed governors many states have adopted formal plans to oppose it. However, a privacy advocate today told WND that the EDLs are many times worse.

WND also previously has reported on such chips when hospitals used them to identify newborns, a company desired to embed immigrants with the electronic devices, a government health eventshowcased them and when Wal-Mart used microchips to track customers. source – WND