UN Secretary General Ban Ki-moon on Tuesday hailed Pope Francis as "a spiritual leader of the world" and emphasized goals of social justice shared between the Vatican and the... 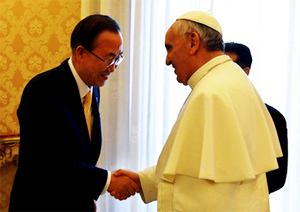 “And I beheld another beast coming up out of the earth; and he had two horns like a lamb, and he spake as a dragon.” Revelation 13:11

VATICAN CITY – UN Secretary General Ban Ki-moon on Tuesday hailed Pope Francis as “a spiritual leader of the world” and emphasized goals of social justice shared between the Vatican and the United Nations.

“The Holy See and the UN share common goals and ideas,” said Ban—one of the first world leaders to be received at an audience by the new pontiff.

Francis has called for the Roman Catholic Church to be closer to ordinary people and help the needy, as well as to reach out to people of different religions and non-believers.

“We discussed the need to advance social justice and accelerate work to meet the Millenium Development Goals,” Ban said after the meeting.

The international community has undertaken to meet goals including eradicating extreme poverty and hunger and reducing child mortality by 2015. “Pope Francis is a man of peace and purpose. He is a voice for the voiceless,” he said.

Ban said he also invited the pope to visit the United Nations “at his earliest convenience.”

The UN leader also commented on the pope’s choice to name himself after St Francis of Assisi, saying this was “a powerful message for the many goals shared by the United Nations.”

“It speaks loudly of his commitment to the poor, his acute sense of humility, his passion and compassion to improve the human condition,” he said. Ban gave the pope a large book with the Charter of the United Nations in six languages. The pope, who only spoke in Italian, gave Ban a mosaic of Rome. source – GMA News