A UFO, not behaving like a meteor, streaked across the skies of Arizona, causing many to call police. And for a local news team to head out of the... 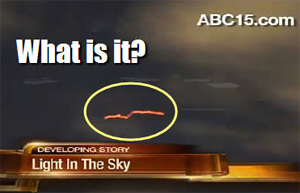 A UFO, not behaving like a meteor, streaked across the skies of Arizona, causing many to call police. And for a local news team to head out of the studio to investigate. What was it?

In a sign that mainstream media is beginning to pay serious attention to the unidentified flying object phenomenon, local Arizona TV news affiliate ABC15 did a two-minute news segment on the fireball which was reportedly streaking across the sky as the newscast aired live.

Witness photographs and videos were shown on-screen, and this one, showing an irregular flight path of the object, was broadcast.

The news team speculated over what the object could be, even calling it a UFO at one point.

A camera crew was sent out to the field to catch video of the object and they were successful.

Whatever it was, it certainly got plenty of attention.

It seems that everyone around the world, believers or not, are beginning to take this issue more seriously. source – Gather