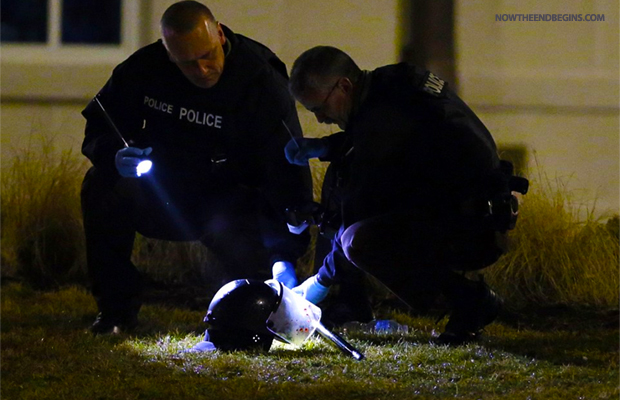 Evidence: Police examine a blood-spattered helmet as they investigate the scene where two police officers were shot - one in the face, the other in the shoulder - outside the Ferguson police HQ where protesters had gathered after the resignation of police chief Thomas Jackson
by Geoffrey Grider March 12, 2015
NOW THE END BEGINS SHARE:

Two police officers have been shot outside the police headquarters in Ferguson where the shooting of black teenager Michael Brown by a white officer sparked a wave of angry protests across the U.S. last year.

Last month, we revealed to you that the Ferguson race riots were funded by a George Soros effort to the tune of $33 million dollars. Race baiting and race wars are one of the main components of the liberal strategy to keep America angry and divided.

It is interesting to note that no press releases by Al Sharpton or Jesse Jackson condemning the racially-charged shootings have been released. Why not?

Gunfire erupted during protests following the resignation of Ferguson Police Chief Thomas Jackson late last night as angry scuffles broke out between officers and the public.

Evidence: Police examine a blood-spattered helmet as they investigate the scene where two police officers were shot – one in the face, the other in the shoulder – outside the Ferguson police HQ where protesters had gathered after the resignation of police chief Thomas Jackson

He has been widely criticized from the outset for the aggressive police response to Michael Brown protests and many felt he should have resigned soon after Brown’s death.

Both were taken to hospital, where Belmar said they were conscious, but described their injuries as ‘serious’ without giving further details.

Seconds after the shots were fired and the cops went down, a protester on the other side of the street shouted out: ‘Acknowledgement nine months ago would have kept that from happening’ – no doubt in reference to the death of Michael Brown.