In a dramatic turn of events, Turkey announced that it was expelling Israeli Ambassador Gabby Levy from Ankara. Davutoglu said Turkey's diplomatic representation in Israel would be further reduced... 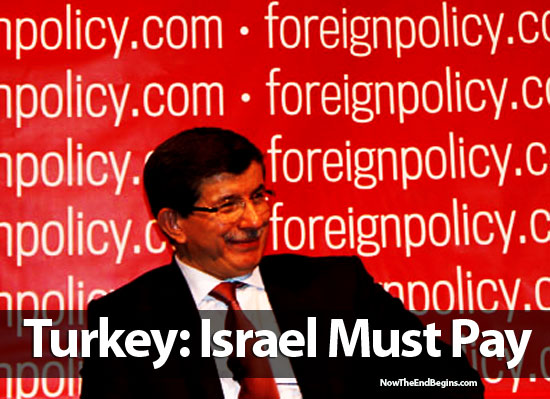 Turkish FM: Time for Israel to pay the price.

In a dramatic turn of events, Turkey announced that it was expelling Israeli Ambassador Gabby Levy from Ankara. Davutoglu said Turkey’s diplomatic representation in Israel would be further reduced to second-secretary level. In accordance, all lower Israeli diplomatic personnel above the second-secretary level have also been expelled. The announcement followed a press conference, in which Davutoglu said that some of the UN’s Palmer Report findings on the raid were “unacceptable,” adding that it was “time for Israel to pay the price… The highest price it can pay is losing our friendship.”

“Today, we reached a point where Israel has, in fact, spent all of the chances that were given to them. The Israeli government, on the other hand, see themselves (as being) above international laws and human conscience,” the Turkish FM said.

Turkey withdrew its own ambassador to Israel immediately after last year’s raid. Davutoğlu’s stated that Ankara views the Israeli government as responsible for the situation, and that Turkey will not revise its position on the matter until Israel reconsiders its stand on the flotilla incident. Davutoğlu added that despite the Palmer Report findings, Turkey does not recognise the legality of the Israeli blockade on Gaza.

Turkish President Abdullah Gul reportedly said Friday that as far as Turkey was concerned, the Palmer Report was “null and void.” Ankara is also said to be exploring its options against Israel with the International Court of Justice.

Earlier Friday, Turkey vowed that its demand for an apology from Israel would remain unchanged, stating that it is powerful enough to protect the rights of its citizen. The statement was made in Ankara’s first official reaction to a leaked United Nations panel report on the Mavi Marmara incident.

Israel remains adamant over its decision not to offer Turkey an official apology. A senior official told Ynet that while Israel is aware of the implications of its decision to refrain from issuing an apology, “we cannot conduct ourselves based on ultimatums.”

The Palmer Report does not demand an Israeli apology, establishing instead that Israel should express regret and pay reparations, the official said, adding that Jerusalem still hoped that the two countries could “return to the cooperation that was a cornerstone of regional stability.” Another senior official added that “the severing of ties goes against Turkey’s strategic interests.”  source – YNet