The White House gave the country a 15-day window to flatten the soaring curve of infection, but some disease modelers see a trajectory that could create a crisis, similar to Italy, that would start to overwhelm the U.S. health care system in about 10 days. Fauci called the 15 days “a trial” period for the guidelines to be reconsidered. “It isn’t that these guidelines are now gonna be in effect until July,” he clarified. “What the president was saying is the trajectory of the outbreak may go until then.” If you feel sick, stay home. Do not go to work. Contact your medical provider.

President Donald Trump on Monday acknowledged the gravity of the coronavirus pandemic, releasing strict new 15-day window guidelines to limit people’s interactions in an increasingly urgent bid to slow the virus in the next two weeks before U.S. hospitals are overwhelmed.

While doing our weekly NTEB Radio Bible study program on Sunday night, I felt myself getting a little hotter than usual while at the same time feeling the glands in my neck swelling just a little. No fever, but I do feel like I might be coming down with a springtime cold as I have been known to do. But given the current climate we find ourselves in at the moment with the coronavirus, I have decided to heed our president’s advice to stay home for a ’15-day window’, and am writing this to encourage all of our readers to do the same thing.

“For God hath not given us the spirit of fear; but of power, and of love, and of a sound mind. Be not thou therefore ashamed of the testimony of our Lord, nor of me his prisoner: but be thou partaker of the afflictions of the gospel according to the power of God;” 2 Timothy 1:7,8 (KJB)

President Trump is not hitting the panic button, and neither should you, but there are things we can do to help stop the spread of the coronavirus. The best thing you can do is stay home as much as possible for a 15-day window that starts now and ending in the beginning of April.

The new recommendations are simple to follow but will have a resounding impact on public health. While the President leads a nationwide response, bringing together government resources and private-sector ingenuity, every American can help slow the virus’ spread and keep our most high-risk populations safe:

As Christians, we need to be good stewards of the things the Lord has given us, and we need to be a blessing to those around us. We have not been given the spirit of fear, but of power, love and a sound mind. Let’s start using that sound mind to lead the way during this crisis. Most of all, start telling people about how to be saved.

FROM POLITICO: “We have an invisible enemy,” the president said at a news conference, where he released guidelines that called for people to avoid gathering in groups of more than 10 people, steer clear of eating and drinking at bars, restaurants and food courts, and work or attend school from home whenever possible. “This is a bad one. This is a very bad one.”

The guidelines — including a strict recommendation that anyone with even minor symptoms stay home — are not mandatory. But they were issued with a sense of alarm and a frankness that Trump has not previously displayed. 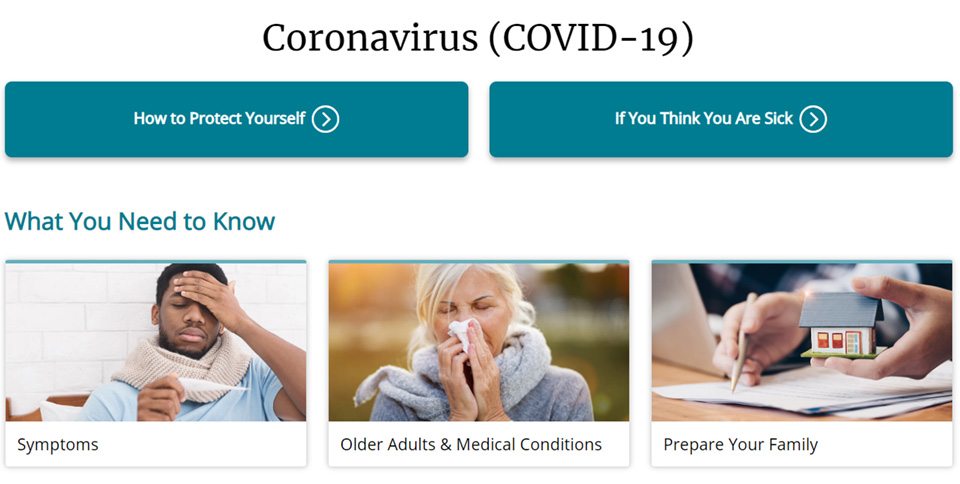 The president acknowledged that the crisis — which has already killed thousands around the world and set off a plunge of world markets — could last until July or August and even plunge the nation into a recession. No country, including the United States, has it under control, he said, though he also suggested America could limit its death toll “if we do a really good job” responding now.

“Each and every one of us has a critical role to play in stopping the spread and transmission of the virus,” Trump said. “If everyone makes this change or these critical changes and sacrifices now, we will rally together as one nation, and we will defeat the virus, and we’re going to have a big celebration altogether. With several weeks of focused action, we can turn the corner and turn it quickly.”

Anthony Fauci, director of the National Institute of Allergy and Infectious Diseases, said that while some people may perceive the guidelines as inconvenient or going too far, they reflect a deteriorating assessment of the containment efforts and should be taken seriously.

There are 195 countries. Excluding China, which is having basically ZERO growth, 85% of COVID-19 deaths are taking place in just 3 of those countries, or just 1.5%.

“When you’re dealing with an emerging infectious diseases outbreak, you are always behind where you think you are if you think that today reflects where you really are. That’s not word speak. It means if you think you’re here,” Fauci said, gesturing to illustrate his point, “you’re really here because you’re only getting the results. Therefore, it will always seem that the best way to address it would be to be doing something that looks like it might be an overreaction. It isn’t an overreaction.”

The White House gave the country a 15-day window to flatten the soaring curve of infection, but some disease modelers see a trajectory that could create a crisis, similar to Italy, that would start to overwhelm the U.S. health care system in about 10 days.

Fauci called the 15 days “a trial” period for the guidelines to be reconsidered. “It isn’t that these guidelines are now gonna be in effect until July,” he clarified. “What the president was saying is the trajectory of the outbreak may go until then.”

The new guidelines come on the heels of Centers for Disease Control and Prevention guidance Sunday night that recommended the cancellation and postponement of gatherings of 50 people or more for the next eight weeks. It also comes after the Office of Personnel Management declared federal offices in the Washington, D.C., area open but with maximum flexibility for telework. READ MORE