Has Tim Tebow made a believer out of you yet? Even when he remains silent on the issue, Tebow gets his message across. Just take a look at a... 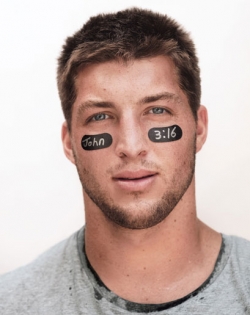 Has Tim Tebow and John 3:16 made a believer out of you yet?

From the LA Times: Much fun has been made about Tim Tebow’s devotion to Christianity. Some people complain that the Denver Broncos quarterback mentions God and Jesus too much. But even when he remains silent on the issue, Tebow gets his message across. Just take a look at a couple of items from Sunday’s 29-23 overtime victory over the Pittsburgh Steelers.

In his college days, Tebow wore John 3:16 under his eyes. NFL rules prohibit this practice now

1. He passed for 316 yards against the Steelers.

Which brings to mind perhaps the most famous Bible verse of all, John 3:16.

Who needs a rainbow-haired guy holding up a John 3:16 sign when you have Tebow?

2. Tebow set an NFL playoff record with 31.6 yards per completion.

Thomas had 204 receiving yards and was responsible for the game-winning touchdown in overtime.

So, you may be able to silence Tim Tebow, but apparently you can’t contain him. Somehow, some way, his message comes through.

It’s Tim Tebow’s world, and we are just living in it. source – LA Times