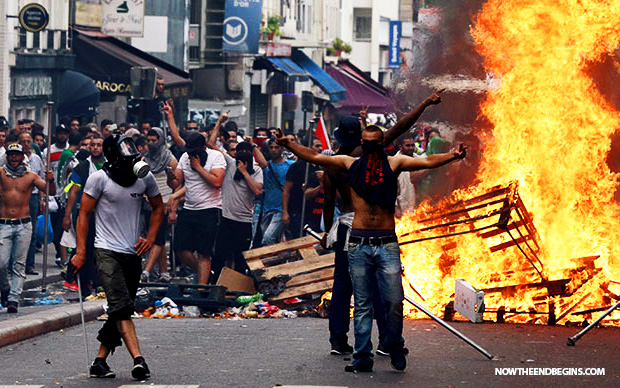 Pro-Palestinian protesters face police during a demonstration against violence in the Gaza strip, which had been banned by police, in Paris, July 19, 2014.
by Geoffrey Grider July 19, 2014
NOW THE END BEGINS SHARE: 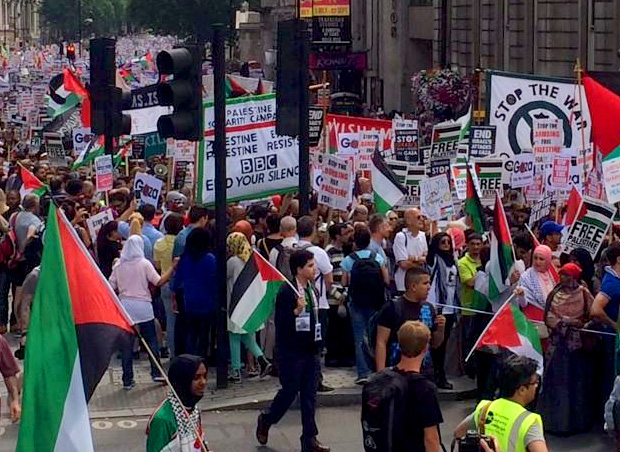 Saturday’s demonstration in London came on the heels of numerous protests Thursday and Friday worldwide, including Cairo, Istanbul, Cape Town, Berlin, New York and Washington. Many of the protests have turned violent.

Led by speakers on a podium, protesters holding placards and banners chanted pro-Palestinian and anti-Israel slogans. At one point, a woman on the podium shouted “from the river to the sea” — a call for the elimination of Israel — and protesters responded by yelling “Palestine will be free.”

The crowd also directed shouts of “Shame on you” at Cameron, who publicly backed Israel’s right to defend itself against Hamas rocket fire aimed at the Israeli civilian population.

The Palestine Solidarity Campaign, which organized the demonstration, said that since the protest began at 12 p.m. (GMT), tens of thousands of people had gathered, more than the 20,000 anticipated. The demonstration began outside Downing Street and was to march to the Israeli embassy.

Pro-Palestinian protesters face police during a demonstration against violence in the Gaza strip, which had been banned by police, in Paris, July 19, 2014.

“London has already shown its outrage at Israel’s attacks on the mostly refugee population of Gaza, with people turning out in their thousands last week,” PSC Director Sarah Colborne said in a press release on the organization’s website. “Today’s national demonstration will give people from across the country the chance to say enough is enough, Israel’s siege of Gaza and its occupation of Palestinian land has to end now.”