This Is Islam: Danish Teen, 15, Stabs Her Mother To Death After Dating Muslim 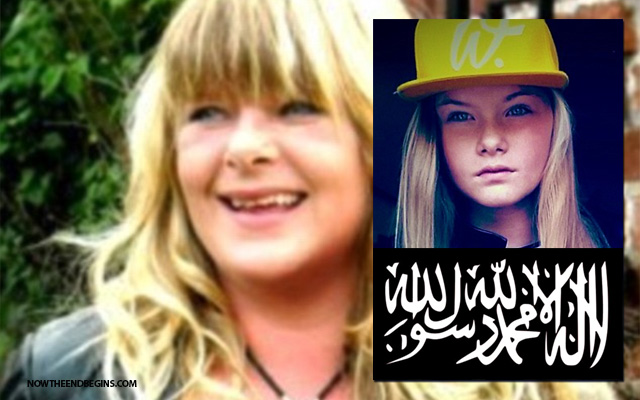 EDITOR’S NOTE: If you are a non-Muslim parent and your daughter is dating a Muslim, just be aware and forewarned that what happened to this Danish mother could easily happen to you, too. Islam is a culture of death, blood and intense hatred for anyone and everyone who is not a Muslim. Tina Römer Holtegaard found out the hard way about the ‘religion of peace’. Don’t think that your precious child could ever turn against you? This article will give you 20 reasons why that could absolutely happen.

A blonde Danish teenager who murdered her mother after watching ISIS’ sickening filmed beheadings of British hostages has been jailed along with her older jihadi lover. Lisa Borch was aged only 15 when in October last year she spent hours on YouTube watching footage of the savage decapitations of David Haines and Alan Henning.

Afterwards she and her radical Muslim boyfriend Bakhtiar Mohammed Abdulla, 29, took a long-bladed kitchen knife and stabbed her mother Tina Römer Holtegaard at least 20 times at the home they shared in rural Kvissel.

CLICK TO ENTER THE RELIGION OF PEACE HALL OF FAME

A court which sentenced Borch to nine years in jail heard how she became obsessed with militant Islam after falling in love with an unnamed Muslim man. But he jilted her when he moved back to Sweden to be with his wife and children.

Nevertheless she found a new soulmate in Iraq-born Abdulla, whom she befriended after meeting at a refugee centre near her home.

Following the brutal murder, in which both Borch and Abdulla participated, the teenager called police claiming: ‘I heard my mother scream and I looked out the window and saw a white man running away. Please come here, there is blood everywhere.’

There is no ‘radical Islam’, all Islam is Islam

On arrival police found Mrs Holtegaard, whose husband was away on a short business trip at the time of her murder, covered in her own blood in bed.

Despite making the frantic phone call, the victim’s daughter was discovered sitting on a chair in the living room playing with her iPhone and watching videos on YouTube. When police asked where her mother was, Borch refused to leave her computer and simply pointed upstairs.

A later police examination of the computer showed that she had watched endless repeats of the beheadings of the two Britons, both of whom had gone to Syria on humanitarian missions. source