The Vatican, Pope Francis and the United Nations teamed up to warn the world of the effects of climate change on Tuesday, coming down firmly against skeptics who deny... 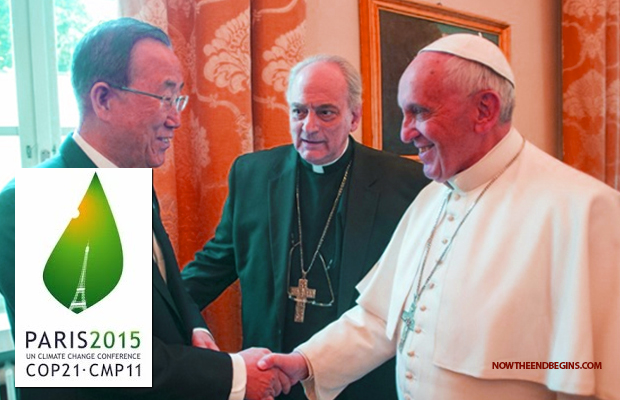 The Vatican and the United Nations teamed up to warn the world of the effects of climate change on Tuesday, coming down firmly against skeptics who deny human activities help change global weather patterns.

“And upon her forehead was a name written, MYSTERY, BABYLON THE GREAT, THE MOTHER OF HARLOTS AND ABOMINATIONS OF THE EARTH.” Revelation 17:5 (KJV)

From a spiritual and prophetic perspective, things are starting to get weird with Pope Francis. Very weird. Revelation 17 and 18 says that, in the last days, the Catholic Church once again becomes a world political power, just like the Rome of old. This is why we see the pope, who is a religious figure, suddenly getting very involved with movements and causes as a political figure. Francis has no problem using his global influence over 1.2 billion Catholics to get them to believe that man-made climate change is not only a real thing, but that if they don’t support it they are somehow out of the will of God. In essence, Pope Francis is declaring a jihad against any and all people who would dare say that man-made climate change is false, and using religion to do it. Francis is starting to understand who he is now, and the role he was born to play. The False Prophet.

Here is the permanent “climate change” that God is planning on performing:

“But the day of the Lord will come as a thief in the night; in the which the heavens shall pass away with a great noise, and the elements shall melt with fervent heat, the earth also and the works that are therein shall be burned up.” 2 peter 3:10 (KJV)

Talk about your global warming. Ahh…if only Pope Francis believed the Bible.

“We wish to elevate the importance of the moral dimensions of protecting the environment in advance of the Papal encyclical and to build a global movement to deal with climate change and sustainable development throughout 2015 and beyond.”

Vatican City – U.N. Secretary General Ban Ki-Moon discussed climate change with the pope before opening a one-day conference of scientists and religious leaders called “The Moral Dimensions of Climate Change and Sustainable Development“. The pope, who is due to make a major address on sustainable development at the United Nations in September, has said he believes man is primarily responsible for climate change and is writing an encyclical on the environment.

Ban, opening the conference of some 60 scientists, religious leaders and diplomats hosted by the Pontifical Academy of Sciences, urged industrialized countries to invest in clean energy and reduce their carbon footprints.

The gathering’s joint declaration said “human-induced climate change is a scientific reality, and its decisive control is a moral imperative for all of humanity”. Ban said he and the pope discussed Francis’ keenly awaited encyclical, which is expected to address the issue of man’s responsibility for climate change.