The Gospel Truth About Vatican City And The Roman Catholic Church

The Roman Emperor Constantine established himself as the head of the church around 325 A.D., which made this new "Christianity" the official religion of the Roman Empire. The first actual Pope in Rome was probably Leo I (440-461 A.D.), although some claim that Gregory I was the first (590-604 A.D.). This ungodly system eventually ushered in the darkest period of history known to man, properly known as the "Dark Ages" (500-1500 A.D.). Through popes, bishops, and priests, Satan ruled Europe, and Biblical Christianity became illegal.

The Roman Catholic Church claims to have started in Matthew 16:18 when Christ supposedly appointed Peter as the first Pope. However, the honest and objective student of the Scriptures and history soon discovers that the foundation of the Roman church is none other than the pagan mystery religion of ancient Babylon.

The church and it’s true beginnings. While enduring the early persecutions of the Roman government (65-300 A.D.), most of professing Christianity went through a gradual departure from New Testament doctrine concerning church government, worship and practice. Local churches ceased to be autonomous by giving way to the control of “bishops” ruling over hierarchies. The simple form of worship from the heart was replaced with the rituals and splendor of paganism. Ministers became “priests,” and pagans became “Christians” by simply being sprinkled with water. This tolerance of an unregenerate membership only made things worse. SPRINKLED PAGANISM is about the best definition for Roman Catholicism.

“This is a great mystery: but I speak concerning Christ and the church.” Ephesians 5:32 (KJV)

The Roman Emperor Constantine established himself as the head of the church around 325 A.D., which made this new “Christianity” the official religion of the Roman Empire. The first actual Pope in Rome was probably Leo I (440-461 A.D.), although some claim that Gregory I was the first (590-604 A.D.). This ungodly system eventually ushered in the darkest period of history known to man, properly known as the “Dark Ages” (500-1500 A.D.). Through popes, bishops, and priests, Satan ruled Europe, and Biblical Christianity became illegal.

Throughout all of this, however, there remained individual groups of true Christians, such as the Waldensens and the Anabaptists who would not conform to the Roman system.

The Worship of Mary

“The children gather wood, and the fathers kindle the fire, and the women knead their dough, to make cakes to the queen of heaven, and to pour out drink offerings unto other gods, that they may provoke me to anger.” Jeremiah 7:18 (KJV)

Roman Catholics believe that Mary, the mother of Jesus, remained a virgin after the birth of Jesus and was sinless all of her life. She is worshiped in the Catholic church as the “Mother of God” and the “Queen of Heaven.” St. Bernard stated that she was crowned “Queen of Heaven” by God the Father, and that she currently sits upon a throne in Heaven making intercession for Christians. The Bible teaches otherwise.

In the Bible, Mary was a sinner just like the rest of us. She said herself that she needed a “Saviour” (Lk. 1:47), and she even had to offer a sacrifice for her sins in Luke 2:24. Jesus was only her “firstborn” son, according to Matthew 1:25, because she later had other children as well (Mt. 13:55; Gal. 1:19; Psa. 69:8). There’s only ONE mediator between God and men, and it isn’t Mary (I Tim. 2:5). The last time we hear from Mary in the Bible she is praying WITH the disciples, not being prayed to BY the disciples (Acts 1:14). The Bible never exalts Mary above anyone else. Neither should we. 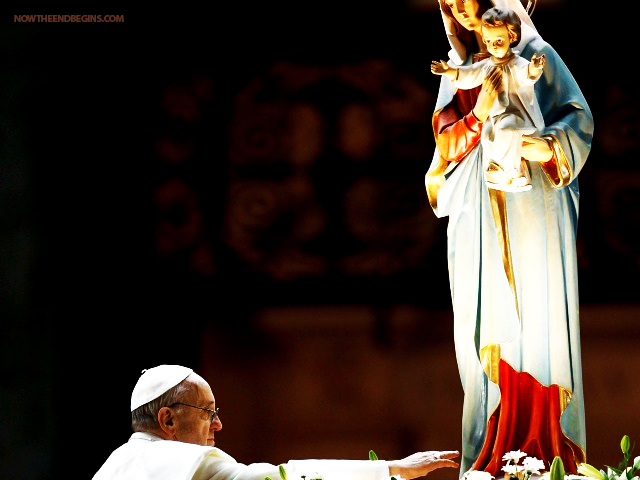 Pope Francis praying to Mary and seeking her blessing. Now where do I find that in the Bible again? Hmm…

The Catholic Church teaches that a Christian’s soul must burn in purgatory after death until all of their sins have been purged. To speed up the purging process, money may be paid to a priest so he can pray and have special masses for an earlier release.

This heresy began creeping into the Roman Church during the reign of Pope Gregory around the end of the sixth century, and it has no scriptural support. In fact, Jesus warned us about this pagan practice in Matthew 23:14 when He spoke of those who devoured widows houses and made long prayers for a pretence. Psalm 49:6-7 tells us that a person couldn’t redeem a loved one, even if such a place did exist: “They that trust in their wealth, and boast themselves in the multitude of their riches; None of them can by any means redeem his brother, nor give to God a ransom for him:”

Peter addresses this issue in Acts 8:20 when he says, “Thy money perish with thee, because thou hast thought that the gift of God may be purchased with money.” God’s word is clearly against the doctrine of purgatory.

The Mass & The Bible

By perverting the Christian practice of the Lord’s Supper (Mat. 26:26-28; I Cor. 11:23-27), the Catholic Church has created the Mass, which they believe to be a continual sacrifice of Jesus Christ:

“Christ…commanded that his bloody sacrifice on the Cross should be daily renewed by an unbloody sacrifice of his body and blood in the Mass under the simple elements of bread and wine.” (The Catholic Encyclopedia, Vol. 10, Pg. 13, Article: “Mass, Sacrifice of”)

Jesus never made such a command. If you’ll check the above references in Matthew 26 and I Corinthians 11, you’ll see for yourself that the Lord’s Supper is a MEMORIAL and a SHOWING of Christ’s death until He comes again. It is not a sacrifice. The Catholic Encyclopedia states the following: 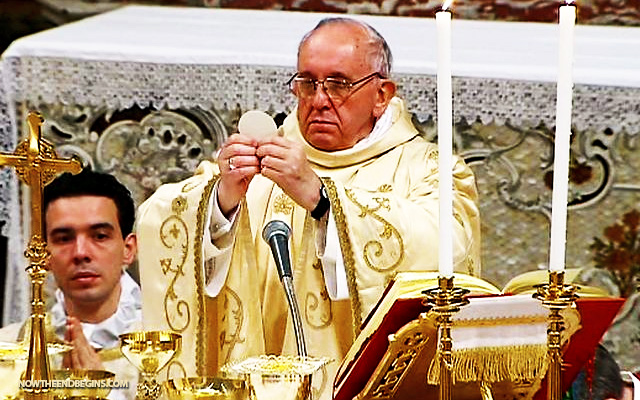 The Catholic Church teaches that the “Holy Mass” is a LITERAL EATING AND DRINKING OF THE LITERAL FLESH AND BLOOD OF JESUS CHRIST. The priest supposedly has the power to change the bread and wine into the body and blood of Christ.

Now, what does God’s word say about such practices? If you’ll read Genesis 9:4, Leviticus 17:11-12, and Acts 15:29, you will find that God absolutely FORBIDS the drinking of blood all through the Bible.

Rome teaches that the Mass is a continual “sacrifice” of Jesus Christ, but God’s word states that Jesus made the FINAL sacrifice on Calvary! This is made perfectly clear in Hebrews 10:10-12:

“By the which will we are sanctified through the offering of the body of Jesus Christ once for all. And every priest standeth daily ministering and offering oftentimes the same sacrifices, which can never take away sins: But this man, after he had offered one sacrifice for sins for ever, sat down on the right hand of God.”

The mass is unnecessary and unscriptural.

Through infant baptism, keeping sacraments, church membership, going to mass, praying to Mary, and confession (just to mention a few), the Catholic church has developed a system of salvation through WORKS. God’s word says that we are saved by grace through faith in Jesus Christ, not through works:

“For by grace are ye saved through faith; and that not of yourselves: it is the gift of God:” Ephesians 2:8,9 (KJV)

“But to him that worketh not, but believeth on him that justifieth the ungodly, his faith is counted for righteousness.” Romans 4:5 (KJV)

Jesus Christ came into this world to lay down His sinless life for YOU–to pay for your sins, because you couldn’t. Jesus is your only hope for salvation. Only by receiving Him as your Saviour can you enter the gates of Heaven. There is no other way.

“But God commendeth his love toward us, in that, while we were yet sinners, Christ died for us. Much more then, being now justified by his blood, we shall be saved from wrath through him.” Romans 5:8,9 (KJV)

Jesus PAID your way to Heaven for you! By receiving Him as your Saviour, you will be receiving God’s ONLY means of Salvation for you. Are you willing to forsake YOUR righteousness and receive Jesus Christ as your Saviour, your ONLY HOPE for Salvation? Romans 10:13 says, “Whosoever shall call upon the name of the Lord shall be saved.” Romans 10:9 says, “That if thou shalt confess with thy mouth the Lord Jesus, and shalt believe in thine heart that God hath raised him from the dead, thou shalt be saved.” Are you willing to forsake your own righteousness, and trust Jesus Christ alone? He will save you just as He promised. Why not receive Him today and trust Him to give you a better way of life? source