The Strange, Unfulfilled Doomsday Prophecy Of The Apostle Peter Found In Acts Chapter 2

It's the day of Pentecost, and it's the very first baby steps of the Church. Peter is preaching, the Holy Spirit is falling like flames of fire, and thousands are getting saved. The miracle of tongues - the ability to speak a foreign language you never learned - is in evidence, and the shocked people watching begin to mock and say that they're drunk. Peter rebukes them, and then says something startling. He says not only are these men not drunk, but that the Tribulation is about to start and Jesus is getting ready to come back and fight the battle of Armageddon. What???

It’s the day of Pentecost, and it’s the very first baby steps of the Church. Jesus was standing up and getting ready to come back. So what happened?

As Christians, when we read the New Testament, we have a tendency to take everything from Matthew 1 to Revelation 22 and lump it all together with the Church. For many of us, this is how we were taught to read the Bible. But this is not how the Bible was written.

“For these are not drunken, as ye suppose, seeing it is but the third hour of the day. But this is that which was spoken by the prophet Joel; And it shall come to pass in the last days, saith God, I will pour out of my Spirit upon all flesh: and your sons and your daughters shall prophesy, and your young men shall see visions, and your old men shall dream dreams:” Acts 2:15-17 (KJV)

All of the New Testament was not written about the Church living in the age of Grace. In fact, there are 3 different groups of people that God can be addressing at any given time. 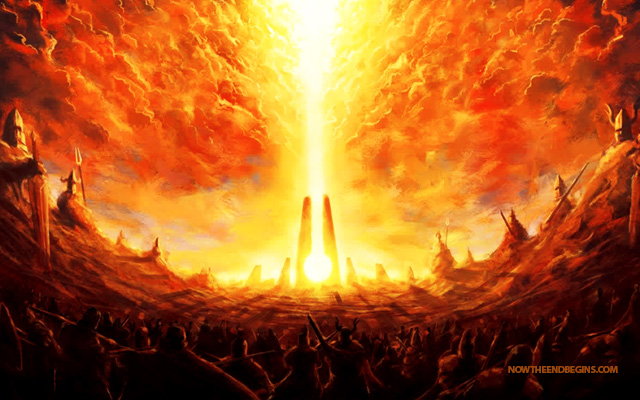 One of the greatest examples of this is found in Acts 2, where the apostle Peter is talking about something very strange. We understand that Acts 2 is the start of the Christian Church, that’s true, but the story that it tells is of the Church in transition and not one in completion. In Acts 2, Peter is in charge, but just a few chapters later he will be replaced by the Apostle Paul, and by Acts 15 he is gone never to be heard from again. When Peter preaches the need to “repent and be baptized” in Acts 2:39, this gospel is not at all like the gospel Paul would preach in Ephesians 2:8,9 of salvation by grace though faith, with no works attached to it at all. The dispensation of faith plus works ends with Peter and the age of Grace begins with Paul.

But before it happens, Peter opens his mouth and utters a prophecy that remains unfulfilled to this day.

It’s the day of Pentecost, and it’s the very first baby steps of the Church. Peter is preaching, the Holy Spirit is falling like flames of fire, and thousands are getting saved. The miracle of tongues – the ability to speak a foreign language you never learned – is in evidence, and the shocked people watching begin to mock and say that they’re drunk. Peter rebukes them, and then says something startling. He says not only are these men not drunk, but that the Tribulation is about to start and Jesus is getting ready to come back and fight the battle of Armageddon. What??? Yep. We know this is true because he opens his mouth and quotes from the Prophet Joel, who wrote almost exclusively on the subject of the Tribulation and Armageddon. We quoted the first part of it at the start of this article, here is the rest of it:

“And on my servants and on my handmaidens I will pour out in those days of my Spirit; and they shall prophesy: And I will shew wonders in heaven above, and signs in the earth beneath; blood, and fire, and vapour of smoke: The sun shall be turned into darkness, and the moon into blood, before that great and notable day of the Lord come: And it shall come to pass, that whosoever shall call on the name of the Lord shall be saved.” Acts 2:18-21 (KJV)

To me, that’s truly amazing. Peter is telling the crowds that had gathered that what the Prophet Joel had prophesied about the Battle of Armageddon and the Second Coming of Jesus was coming true right then and there. If that had continued to happen, there would have been no Church Age, no Apostle Paul, no gentiles being saved. None of it. Let that thought sink in for a moment. So if Peter was saying that Joel’s prophecy was coming true, what stopped it?  It stopped in Acts chapter 7.

“When they heard these things, they were cut to the heart, and they gnashed on him with their teeth.” Acts 7:54 (KJV)

It all came to a crashing halt when the Jews rejected the preaching of Stephen. When the Holy Spirit spoke through Stephen, God was giving His People one more chance to get it right. They rejected God the Father in the Old Testament, and they resulted in 400 years of silence from Malachi to Matthew. They rejected Jesus Christ in the New Testament, and that resulted in the cross and the empty tomb. Now here in Acts 7, God gives them one, last chance to accept the witness of the Holy Spirit through Stephen.

Stephen preaches his heart out, and lets it fly with both barrels. This is some of the best preaching found anywhere in the Bible. At the end of it, in accordance with Peter declaring Joel’s prophecy to be coming true in Acts 2, we see Jesus STANDING UP and ready to return to the Earth. This is end, here He comes…..

…but it was not to be. Why? The Jews did not receive Stephen’s preaching, in fact, the Bible records that they beat him to death with rocks. What was the result? Stephen died, the window in Heaven closed, and Jesus sat back down. Joel’s prophecy would be postponed for 2,000 more years. In Acts 8, the first gentile gets saved with the Ethiopian eunuch and Philip, and in Acts 9, Saul gets knocked off his horse and get commissioned by Jesus Himself to be the leader of what the Church would fully transition into. A church made of up both Jews and Gentiles, in one body. Peter never saw it coming, and Paul called it a “mystery”.

“Whereof I am made a minister, according to the dispensation of God which is given to me for you, to fulfil the word of God; Even the mystery which hath been hid from ages and from generations, but now is made manifest to his saints: To whom God would make known what is the riches of the glory of this mystery among the Gentiles; which is Christ in you, the hope of glory:” Colossians 1:25-27 (KJV)

The Church Age will end with the Rapture, and that event will usher in the time of Jacob’s Trouble, what Jesus calls the Great Tribulation in Matthew 24. It will be in this time period that Joel’s prophecy will finally be fulfilled. Joel’s prophecy is for the Jews and about Israel, it is the final fire of refinement that God must put His People through. But it has nothing to do with the Church. The Church is “Plan B”, it was always “Plan B”. God was fully ready, as Peter preached, to pull the plug without ever creating a gentile Church. Peter was 100% right when he declared Joel’s prophecy to be coming true, but the rejection of Stephen’s preaching by the Jews stopped that timeclock.

We are in the closing minutes of the Church Age, get something done for Jesus while there is still time left.