In the speeches on October 4 and 6, 1943, Heinrich Himmler addressed 92 SS officers and the Reich and Nazi party leaders, telling them the genocide was a historical... 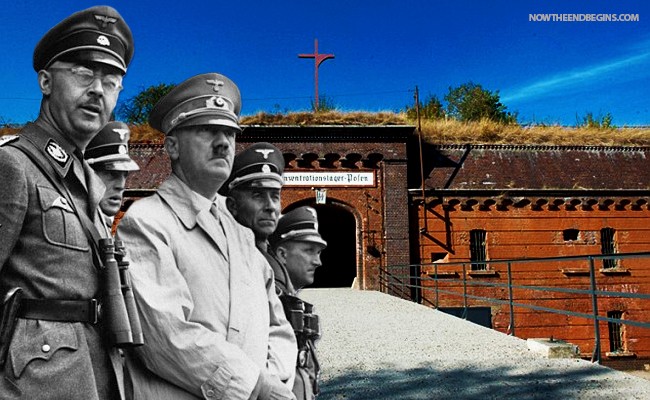 In October 1943, SS and Gestapo chief Heinrich Himmler gave two speeches in Poznan where he spoke explicitly about the mass extermination of the Jews

“Judah is gone into captivity because of affliction, and because of great servitude: she dwelleth among the heathen, she findeth no rest: all her persecutors overtook her between the straits. And from the daughter of Zion all her beauty is departed: her princes are become like harts that find no pasture, and they are gone without strength before the pursuer.” Lamentations 1:3,6 (KJV)

EDITOR’S NOTE: In our day, we have “christian” Holocaust deniers that if they don’t outright deny that the Holocaust was real, they quibble about the numbers and give idiotically low numbers for the people who died there. They further say that there was no plan by the Nazis to exterminate an entire race of people, the Jews. But cowardly killer and Nazi leader Heinrich Himmler vehemently disagrees with those people who say that Hitler’s Final Solution was not real and overwhelming. Listen to Himmler’s own words bragging about it from 1943.

In the speeches on October 4 and 6, he addressed 92 SS officers and the Reich and Nazi party leaders, telling them the genocide was a historical mission of the Nazis. The speeches, which were recorded, justified the crimes already carried out and spoke of the ‘higher purpose’ that had been bestowed upon the party.

At one point in the speech, Himmler praised the killers telling them they were ‘decent men.’ He said: ‘Most of you here know what it means when 100 corpses lie next to each other, when there are 500 or when there are 1,000.

Concentration Camp Poznan is the place where Hitler’s Final Solution to exterminate the Jews began. It is here that they worked all the details for Germany’s death camps that would kill 6 million Jews and 5 million gentiles.

‘To have endured this and at the same time to have remained a decent person — with exceptions due to human weaknesses — has made us tough, and is a glorious chapter that has not and will not be spoken of.’

He then told the packed room in the city’s town hall that they were justified in their mass murder because: ‘If the Jews were still part of the German nation, we would most likely arrive now at the state we were at in 1916 and 1917.’

In the second speech two days later, he explained the reasons for the Final Solution and asked those listening to never speak about it.

He said: ‘I ask of you that that which I say to you in this circle be really only heard and not ever discussed. ‘We were faced with the question: “What about the women and children?” – I decided to find a clear solution to this problem too.

Phony “christians” who deny the reality of the German Nazi Holocaust:

In 2015, phony “christians” like Steven Anderson are preaching the age-old gospel of anti-semitism and hate against God’s chosen people the Jews. Watch this piece of trash all the way through until you get to the part where he says that “most Jews enjoyed their time in the camps, and attended many social events”. Seriously. If you are a Christian who names the Name of Jesus Christ, and you listen to frauds like this, you need to check your salvation and repent.

‘I did not consider myself justified to exterminate the men – in other words, to kill them or have them killed and allow the avengers of our sons and grandsons in the form of their children to grow up.

‘The difficult decision had to be made to have this people disappear from the earth.’

The man responsible for the extermination of nearly six million Jews then said: ‘For the organisation which had to execute this task, it was the most difficult which we had ever had.

The video is GRAPHIC and should not be shown to young children.

‘The Jewish question in the countries that we occupy will be solved by the end of this year. Only remainders of odd Jews that managed to find hiding places will be left over.’ source