The Bible Believers Guide To Rightly Dividing The Word Of Truth

Study to shew thyself approved unto God, a workman that needeth not to be ashamed, rightly dividing the word of truth.... 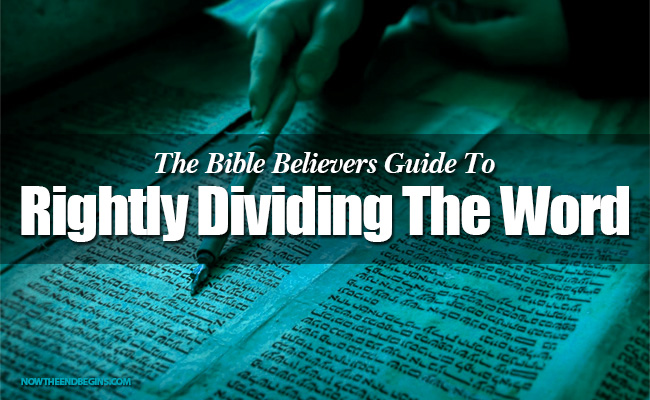 You want God’s approval? Paul says you can get it through Bible study.

“Of these things put them in remembrance, charging them before the Lord that they strive not about words to no profit, but to the subverting of the hearers. Study to shew thyself approved unto God, a workman that needeth not to be ashamed, rightly dividing the word of truth.” 2 Timothy 2:14,15 (KJV)

We live in a day and age where Christians have been fed on nothing but positive affirmations, feelings and finances for so long that they are spiritually dying from biblical malnutrition. Truly our generation is the fulfillment of the Laodicean church in the last days. But for those of us with ears to hear, Paul is still speaking by the power of the Holy Spirit, and he has something he wants us to do. Study the Bible like a blue collar laborer.

In 2 Timothy 2:15, Paul gives us a tri-fold command (God does all His most important things in 3’s) to STUDY – BE A WORKMAN – RIGHTLY DIVIDE whenever we open the pages of the Holy Bible. It is the only place in all the New Testament where Christians are commanded to do so, and is extremely important in light of our ongoing sanctification. You want God’s approval? Paul says you can get it through Bible study. But when you study, he says to be a “workman” about it. What does that mean? Simply put, it means to do it with deliberate intent, strength of spirit, sleeves rolled up and ready to work. Have you ever had a blue collar job? I sure have. It’s hard work and at the end of the day you are tired and sweaty because you expended lots of energy. That’s how God wants you to study the Bible. Read 10 verses a day is better than not reading any at all, but it is by no means a workman-like approach to the Bible. Lasty he says to “rightly divide” the word of truth, and this is where the rubber truly meets the road. Buckle up, kiddies, and let’s do a little digging.

What it means to rightly divide the Bible

First of all, rightly dividing has nothing to do with cherry picking, not one thing. For those of you who maintain that’s what rightly dividing is, you are being intellectually dishonest. Rightly dividing does not mean throwing out verses, any verses, rather it means to put them where they belong. In the Bible, there are 3 groups that God can be addressing at any one time, and these are as follows:

God presents specific and distinct doctrines and promises to all 3 of these groups, and they are not necessarily overlapping or transferable. Let me show you what I mean with this very well-used verse by Christians today:

“If my people, which are called by my name, shall humble themselves, and pray, and seek my face, and turn from their wicked ways; then will I hear from heaven, and will forgive their sin, and will heal their land.” 2 Chronicles 7:14 (KJV)

Every year at the National Day of Prayer, you will hear this verse prayed over and over again as a call for America to repent of our national sins so God will heal our nation. But this verse does not apply to America, or any other nation for that matter except as a promise to the Jewish people and the nation of Israel. The context of the verse is the dedication of Solomon’s Temple, and God is speaking directly to him about “his people” the Jews and their faithfulness in following Him. It is not a transferable promise to Christians in the age of grace. So we “rightly divide” this as a promise to the Jews, doctrinally, and understand that the only application we can make to Christians in America is in a spiritual sense. We can certainly pray for our nation to repent, hope that we do, and hope that God will heal us. But He is not obligated to do so, because He has not promised to do it for us. Let me show you another example of rightly dividing.

The gradual transitioning of the Church unfolds

Jesus did not come to start a Christian church, not at all. Listen to His own words as to why He was sent: “But he answered and said, I am not sent but unto the lost sheep of the house of Israel.” Matthew 15:24 (KJV).  Jesus came to save His people, the Jews, from their sins. But the Jews as a nation rejected Him, and so He went to the gentiles. But all the way up to Acts chapter 7, it was the Jews who were the focus, not the gentiles. Matthew, Mark and Luke are Jewish books to the Jewish people. There is no salvation by grace through faith alone. The Jews rejected God the Father in the Old Testament and wound up with 400 years of silence from Malachi to Matthew. They rejected God the Son in the New Testament, and wound up with the veil of the Temple ripped in two. And finally, they rejected God the Holy Spirit at the preaching of Stephen in Acts 7, and that’s when God put the Jews into a 2,000 year time out, and turned His attention to the gentiles. In the very next chapter, Acts 8, the first gentile gets saved at the witness of Phillip, and one chapter after that Saul becomes Paul and the New Testament church that started as Jewish church in Acts 2 is rolled into the “new work” of Paul, and by Acts 15 the church that we know today is up and running. God will yet turn His attention back to the Jews and Israel after the Rapture, and will use the 144,000 to fulfill promises like these:

“And he said unto them, Go ye into all the world, and preach the gospel to every creature. He that believeth and is baptized shall be saved; but he that believeth not shall be damned. And these signs shall follow them that believe; In my name shall they cast out devils; they shall speak with new tongues; They shall take up serpents; and if they drink any deadly thing, it shall not hurt them; they shall lay hands on the sick, and they shall recover.” Mark 16:15-18 (KJV)

When you read the signs that follow those that believe, you understand rather quickly that God is not talking to the Christian church. Yes, there are those that claim to speak in tongues and cast out demons today, but not so much the other three signs. There is not a Christian on the face of the earth today that can perform or display signs 3-5 as written. Many a backwoods Pentecostal preacher has “taken up” a deadly snake only to be laid to rest shortly after. Same goes for the drinking of poison, obviously. And laying hands on the sick and seeing all recover? Nope, not a chance. And why not? Because it was not written to Christians in the Church Age, it was written to Jews looking for a Kingdom. It will yet be fulfilled in the time of Jacob’s trouble, the Great Tribulation, by the 144,000 Jews that God will raise up during that time after the Rapture. So we rightly divide these verses as not being doctrine for the Christian church, and we look for the spiritual application for us.

Paul is the apostle for Christians in the Church Age

When Jesus raised up the Apostle Paul, He did it for a very specific reason. Paul was to be the leader of the new Church made up from believing Jews and Gentiles. He was given mysteries not known to the other apostles, and became their teacher. What the Holy Spirit wrote through Paul – Romans to Philemon – comprise the doctrine for the Church Age, but is by far not the entire New Testament. It is Paul who teaches us about Eternal Security, the Pretribulation Rapture, the Body of Christ, and all the other doctrines we hold so dear. But keep in mind that these are not things taught by Matthew, Mark, Peter and others. Paul’s teaching on Eternal Security flies directly in the face of Hebrews 6 that says it is “impossible” to be restored if you fall away. But Hebrews, as doctrine, was not written to the Christian Church, it was written to the Hebrews. But unless you study the Bible like a “workman” you will not arrive at these conclusions. They take time, prayer and the illumination of the Holy Spirit to see. Study to show yourself approved unto God, don’t expect Him to reward you with Bible pearls by putting in a half-hearted effort. In salvation, all the work is on Him, all we do is accept it. But for everything after, God expects us to work and work hard as we mature as a Christian. Babies drink milk, full-grown people need meat and lots of it. It has taken me years of hard study to be able to even present this to you today. If you are intellectually honest, you will spend more than 60 seconds in reading this before coming to a conclusion. And in conclusion, I will end with this.

All the Bible was written for us, but all the Bible was not written to us. Jews were promised a kingdom on earth, Christians promised the New Jerusalem. Unbelieving Gentiles await the fires of Hell. Jews are looking for a King to sit on the throne of David, and Jesus will certainly do that in the Millennium. But Christians don’t wait for a King, we are a Bride waiting for her Bridegroom to come get us in the Rapture. Jews were given signs and wonders, Christians walk by faith and not by sight. Jews have a Temple building, Christians have their body as a Temple for the Holy Spirit. For Jews, the sabbath is a day. For Christians, the Sabbath is a Person. And the list goes on and on all the way from Genesis to Revelation.

Rightly dividing puts everything the Bible promises in it’s proper place, reserved for the people it was promised to.