The event has become one of Tel Aviv’s most popular annual festivals. Streets and stores have been decorated with rainbow flags for days. Thousands of Israelis flocked to the city center Friday to observe the parade, filling cafes and restaurants along the route to capacity. 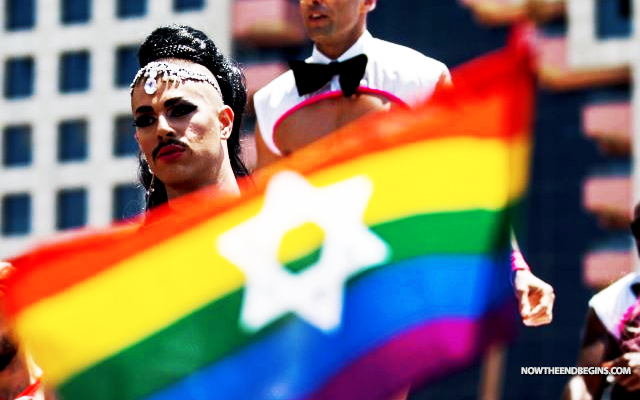 “But the men of Sodom were wicked and sinners before the LORD exceedingly.” Genesis 13:13 (KJV)

EDITOR’S NOTE: In the Bible, God destroyed the twin cities of Sodom and Gomorrah because of their homosexual activity. Israel was regathered physically officially on May 14, 1948, but they have not yet had their spiritual restoration. This will come during what the Prophet Jeremiah calls the “time of Jacob’s trouble”. Jesus, in Matthew 24, calls this time the Great Tribulation. Pray for Israel and the Jewish people for the coming time of refinement in the fiery trial that the God of Abraham has prepared for them.

The parade, now in its 17th year, began at 11 a.m. local time as participants gathered at the city’s Meir Park. At noon, marchers are slated to begin walking down some of the city’s busiest thoroughfares, ending at Charles Clore Park on the Mediterranean beach. The event is scheduled to end at 4 p.m.

Some one-sixth of the participants, or 30,000 people, will be tourists, many of whom came to Israel to participate in the march, according to officials.

The event has become one of Tel Aviv’s most popular annual festivals. Streets and stores have been decorated with rainbow flags for days. Thousands of Israelis flocked to the city center Friday to observe the parade, filling cafes and restaurants along the route to capacity.

“For then shall be great tribulation, such as was not since the beginning of the world to this time, no, nor ever shall be.” Matthew 24:21 (KJV)

The theme of this year’s parade is focused on transgender rights. Events like the parade are key to advancing recognition for the transgendered, Tel Aviv activist Elisha Alexander said earlier this week.

Major arteries in the coastal metropolis will be shut at intervals as the march passes through the city, including parts of Tschernichovsky Street, Bograshov, Hayarkon, Frishman, Marmorek, Arlozorov and the Herbert Samuel beachfront promenade.