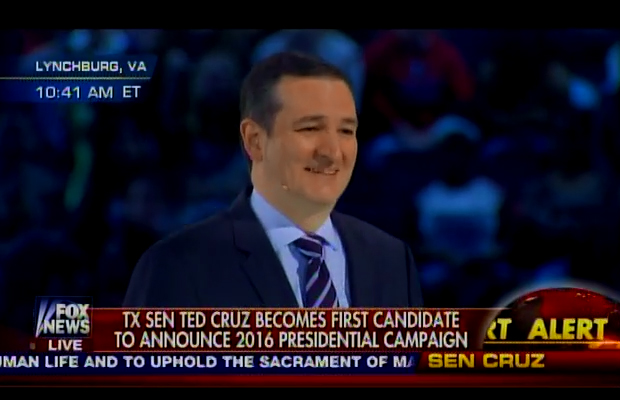 Imagine a president who stands with Israel

Ted Cruz threw his hat into the ring today as he announced his candidacy for president of the United States in the upcoming 2016 elections. But it is what he said about Israel that whipped the crowd into a jubilant frenzy, listen:

Cruz is the first Republican to announce for president, and has injected some much-needed life for Conservatives. He went on to say that “It’s a time for truth, a time to rise to the challenge just like Americans have always done,” Cruz said in the video. “It’s going to take a new generation of courageous conservatives to help make America great again.”

Is he eligible to run for United States President?

Yes, and here’s why:

Cruz was born in Calgary, Canada, while his parents were living there. His father is now an American citizen, but was not at the time; his mother, however, was born in the United States.

Helpfully, the Congressional Research Service gathered all of the information relevant to Cruz’s case a few years ago, at the height of Obama birtherism. In short, the Constitution says that the president must be a natural-born citizen. “The weight of scholarly legal and historical opinion appears to support the notion that ‘natural born Citizen’ means one who is entitled under the Constitution or laws of the United States to U.S. citizenship ‘at birth’ or ‘by birth,’ including any child born ‘in’ the United States, the children of United States citizens born abroad, and those born abroad of one citizen parents who has met U.S. residency requirements,” the CRS’s Jack Maskell wrote.

So in short: Cruz is a citizen; Cruz is not naturalized; therefore Cruz is a natural-born citizen, and in any case his mother is a citizen. source