Sports writer Peter King gets 99% of the way to the Answer, lays out his case perfectly that humanly what happened in the game is neither likely nor possible.... 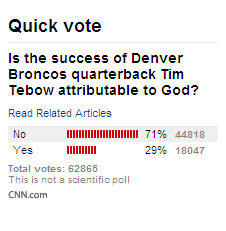 The unsaved world is mired in befuddlement, but we know Who is behind it all. The Holy Spirit!
by Geoffrey Grider December 12, 2011
NOW THE END BEGINS SHARE:

We here at NTEB are by turns pleased and amused as we watch the Tim Tebow phenomenom continue to roll across America. What’s especially amusing is how the unsaved world, who don’t know Jesus personally, continue to attempt to ‘explain’ what is behind Tebow’s unprecedented success. But we who are saved know EXACTLY from whence cometh the power behind Tebow, and SPOILER ALERT here it is:

“But my God shall supply all your need according to his riches in glory by Christ Jesus.” Phillipians 4:19

In the story below, Peter King gets 99% of the way to the Answer, lays out his case perfectly that humanly what happened in the game is neither likely nor possible. But then train wrecks at the end by failing to give the glory to the Holy One of Israel – God Almighty. So we do it for him, enjoy!

If Merriam-Webster could add the definition of “Tebow,” I predict it would go something like this:

Tebow. TEE-bow. Verb. To defeat an opponent while overcoming a major impediment. Ex.: Despite having a 102-degree fever, Lucy managed to Tebow her competition for the Miss America pageant through her great determination.

Now on with week 14, in which, of course, the Denver quarterback Tebowed the Bears in very Tebow fashion.

The unsaved world is mired in befuddlement, but we know Who is behind it all. The Holy Spirit!

He had help. An incredible sequence of events got the Broncos undisputed possession of first place in the AFC West. After starting the season 1-4, Tebow got the quarterback job and has gone 7-1, and this one, in so many ways, was the weirdest — and a game Chicago will kick itself over for weeks. Years, maybe.

Okay. Tebow was 3 of 18 in the first three quarters, and Chicago led 10-0 midway through the fourth. Tebow got hot, though, against a semi-prevent defense and found a wide-open Demaryius Thomas in the end zone for a touchdown to make it 10-7 with 2:08 to go. But the Broncos had no timeouts left. By the time they got the ball back with two minutes left, all the Bears had to do was make one first down to end the game … and even if they didn’t get it, all they had to do was run it three times and stay inbounds.

But Marion Barber ran out of bounds.

Instead of getting the ball with about 20 seconds left at his 20-, Tebow got it at his 20- with 56 seconds left. Plenty of time to get in position to kick a field goal, especially when the corners are giving receivers so much cushion that Tebow can chip away easily. Tebow got Denver just outside the Chicago 40 with eight seconds left. Here came kicker Matt Prater.

“Before the game,” Prater told me afterward, “I kicked one from 70. This was really an unusual day for December in Denver. Usually it’s cold and the ball is hard, and it is usually windy. But it was warm today, and the ball was really traveling. And when I went out to kick, I remember we were supposed to be having 5 to 10 mile-per-hour winds today, but we were really lucky. There was no wind.

And the wind shall be calm, and it shall be warm, and Matt Prater shall be able to kick one from 75.

His 59-yard field goal hit the net behind the goal post. Overtime.

Bears win the toss. Marion Barber, with the Bears probably a couple of yards yards from winning field-goal position, fumbles. Broncos recover. The Coen Brothers rush to LAX to get on the next flight to Denver to beg Tebow for the rights to his life story. At the gate, they discover first-class is taken up totally by Disney execs, racing to do the same thing. 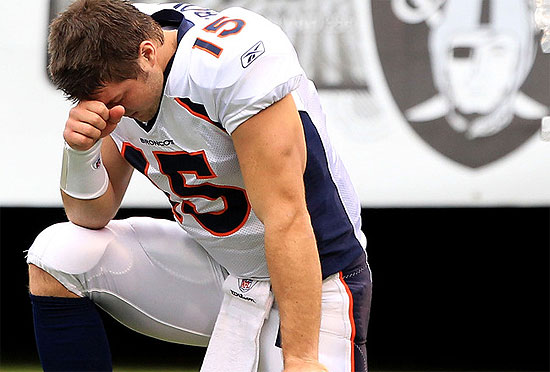 Tebow is humbling himself before the One who saved him, Jesus of Nazareth.

Mayhem in the crowd. Tebow silences the faithful, drives the Broncos 34 yards, and Prater comes on to try his second field goal of longer than 50 yards in seven minutes.

“I try not to overthink,” said Prater. “In fact, I don’t think about anything.”

“I don’t care,” said Prater. “Call as many timeouts as you want.”

The 51-yard winner looked like it was a Tiger Woods tee shot on a par-5 hole. It almost drilled a hole through the net behind the goalpost.

“You know what’s fun about this?” said Prater. “Everyone keeps saying what Tim can’t do. And he goes out every week and we win. We love the guy. He’s so real. Now we just feel like anything’s possible.”

To put it mildly.

Tebow, in the fourth quarter and overtime: 18 of 24, 191 yards, one touchdown, no picks. His late-game heroics — there’s really no logical explanation. Other than this one: I’ve noticed Tebow likes the frenzied style of game, when he can play hurry-up, and defenses get back on their heels a bit, making sure they contain him. The Bears changed late in Sunday’s game. Defensive coordinator Rod Marinelli will be sick when he looks at how lax his corners played Bronco receivers late.

That’ll be a great and compelling game Sunday, New England at Denver. The Patriots’ secondary is in terrible shape. But Bill Belichick had a thing for Tebow before the 2010 draft. I’m told he was fascinated by him. They went out to a long dinner in Boston’s North End, and that’s not something Bill Belichick does with prospects very often. Fun to see Belichick match wits with Tebow in Denver — I hope for the first of many meetings. Peter King / Sports Illustrated