"Target is pleased to be able to bring our guests products they want while, in turn, helping support the LGBT community through the donation of 100 percent of the... 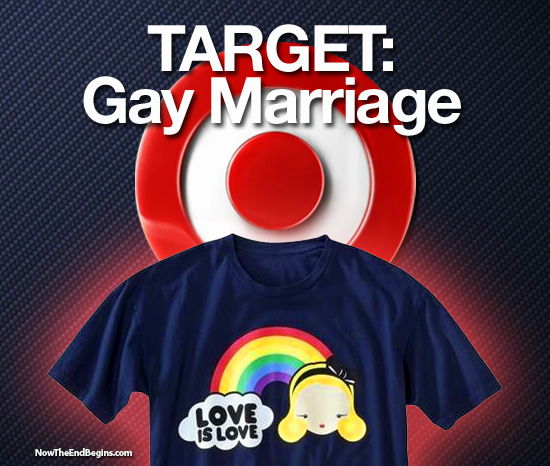 One of the T-shirts that Target is selling to raise money for a group working to defeat a gay marriage ban in Minnesota.
by Geoffrey Grider June 3, 2012
NOW THE END BEGINS SHARE:

“Beloved, let us love one another: for love is of God; and every one that loveth is born of God, and knoweth God. He that loveth not knoweth not God; for God is love. In this was manifested the love of God toward us, because that God sent his only begotten Son into the world, that we might live through him.” I John 4

One of the T-shirts that Target is selling to raise money for a group working to defeat a gay marriage ban in Minnesota.

The Minneapolis-based retailer is taking heat in its home state, where voters will decide this November whether to put a gay marriage ban into the state constitution. One organizer of gay marriage opponents warned that their displeasure could spread to 32 other states where voters have banned gay marriage.

“Target is attacking traditional marriage, which is an incredibly misguided thing for them to have done,” said Chuck Darrell, spokesman for Minnesota for Marriage, a group campaigning to pass the constitutional marriage amendment. “It’s an insult to the overwhelming majority of their customers.”

Target’s move comes two years after it endured a backlash from gay rights supporters for giving $150,000 to a campaign group backing the conservative Republican candidate for Minnesota governor, Tom Emmer, who narrowly lost to Democrat Mark Dayton in a race that went to an automatic recount. The donation set off protests and calls for a boycott from a constituency that had seen Target as an ally.

Supporters of gay marriage see Minnesota as having the potential to halt their long losing streak in statewide votes.

The T-shirt promotion will raise up to $120,000 for the Family Equality Council, a Washington-based group that is part of a Minnesota coalition pushing to defeat the constitutional amendment. The $12.99 shirts will be sold on Target’s website through June, or while supplies last. They come in four designs, emblazoned with words such as “harmony” and “pride.” Singer Gwen Stefani designed one shirt featuring a rainbow and a cloud that says, “LOVE IS LOVE.”

Target hasn’t taken a position on Minnesota’s ballot question. Spokeswoman Molly Snyder said the T-shirt promotion was organized by a group of gay Target employees and their allies. She said it is Target’s second promotion to benefit a specific group. The first, during last year’s holiday season, raised money for St. Jude Children’s Research Hospital through the sale of limited-edition plush dogs.

“Target is pleased to be able to bring our guests products they want while, in turn, helping support the LGBT community through the donation of 100 percent of the purchase price to the Family Equality Council,” the company said in a statement noting its long-standing support of the gay community.

Another statement from the retailer notes “a broad range of strongly held views” on the marriage issue and urges employees to vote.

Family Equality Council director Jennifer Chrisler said the T-shirt proceeds will fund her group’s work around the country, ranging from community building to political advocacy. She added that Target, a longtime sponsor of the Twin Cities gay pride festival, is now sponsoring Family Equality Council retreats for gay families in Massachusetts and California.

“I know and understand what a big reaction that donation had two years ago, and I think they have taken steps, serious steps, to show that they understood that reaction,” Chrisler said. “But I really think this is an extension of the longtime partnership we have had and their commitment to family.”

Minnesota for Marriage doesn’t plan to organize action against Target because of its focus on the November vote, Darrell said. Instead, he is asking supporters of the constitutional amendment to counter the Target promotion by donating $12.99 on his group’s website. He said donations are up since Target started selling the T-shirts.

Darrell also urged Target to get out of the marriage issue — and stay out.

“Just get out of this debate and do what they’re good at,” Darrell said. “Get out of the business of trying to redefine marriage.” source – MSNBC