“Being an elevationist [the term they’ve coined for the theology of the new church] means being an explorer,” Lee begins. “Our spiritual journey is one of self-discovery, not one of dogma. We believe there is no one-path solution to life’s big questions. This is simply a supportive place for each one of us to find a pathway to our own spirituality, whatever that may be.” Think of it like the pick ’n’ mix of belief. There is no doctrine, no creed, no scripture or book. Simply choose bits of whatever world religions work for you, or make something up yourself, mix it all together, and see if it tastes good.

As congregations dwindle, a new religion is lighting up Denver, Colorado. Aaron Millar joins the ‘elevationists’ of the International Church of Cannabis who worship the weed

“Be sober, be vigilant; because your adversary the devil, as a roaring lion, walketh about, seeking whom he may devour: Whom resist stedfast in the faith, knowing that the same afflictions are accomplished in your brethren that are in the world.” 1 Peter 5:8,9 (KJV)

EDITOR’S NOTE: As the present spiritual darkness intensifies over not just America but the world as a whole, we are seeing stranger and stranger phenomena. The Bible tells us that in the time of Jacob’s trouble, the One World Religion will include all manner of deviant behaviour in their “worship” services. Not only will there be drug and alcohol use, but open prostitution and cannibalism as well. Being a pothead has become big business in 2017, and it is also become a religion. They don’t call it pot smoking, now they are partaking in the “holy sacrament of cannabis”. A partnership will Hillsong can’t be too far away. And painting their “sanctuary” in bright, rainbow colors didn’t happen by accident.

It started, naturally, with a group of friends smoking a joint. Steve Berke, a graduate of Yale University, was temporarily living in an old church in Denver, Colorado. His estate agent parents had bought the 113-year-old building with the plan to turn it into flats. He and Lee Molloy, as well as a few friends, had just moved from Miami to capitalise on Colorado’s lucrative marijuana market. But then, in the words of Lee: “We started having these stupid, fantastical conversations. What if we kept it as a church?” So Steve convinced his parents to give him the building and, nine months later, on 20 April 2016 – 4/20, as it’s known in the United States, the unofficial pothead’s holiday (because it’s 4.20pm somewhere, right?) – the International Church of Cannabis opened its doors with its own chapel, theology and video game arcade.

The International Church of Cannabis in Denver:

From the outside all appears normal: red-brick towers, blocky turrets, a classic city church in an otherwise leafy suburb of Denver. But there are giveaways. The three front doors and arched window facade have been spray-painted with silver galaxies and bright, happy-face planets. The work of legendary painter and graphic artist Kenny Scharf, who has exhibited in the Whitney and New York’s Museum of Modern Art, it looks more like the backdrop for an illegal 90s rave than your typical parish church. But it’s indicative of the coup that Elevation Ministries, the non-profit company that Steve and Lee co-founded to set up the Church of Cannabis, has managed to pull off.

“That mural would probably buy you next door’s house,” Lee says, letting me in. But they got it for the price of an air ticket for Scharf, a few days’ skiing and the loan of a jacket. People love fantastical ideas.

The original plan was to open it to the general public, but because Colorado’s current pot law only allows smoking in private clubs, it is, for now at least, a members-only affair. To date they have more than 1,400 on their list. They open the doors from Thursday to Sunday for smoke-free public viewing, with private cannabis services held on Friday nights. It seems to be growing.

Every single surface has been painted in vibrant patterns of red, blue and green, geometric prisms with mythological creatures, stars and eyes hidden within. At the back wall, two dream-like Dali-esque giants sit cross-legged as if lost in meditation. “It feels like a hallucination,” someone says beside me, eyes careening upwards. It’s like being swallowed by a Pink Floyd album cover. Perhaps most impressive of all is that it was created spontaneously without a sketch or a plan. This was another freebie: they flew Spanish artist Okuda San Miguel over and bought him a bunch of paints, then he started work in one corner and painted whatever he dreamed up until he finished. It took him just six days – he rested on the seventh. 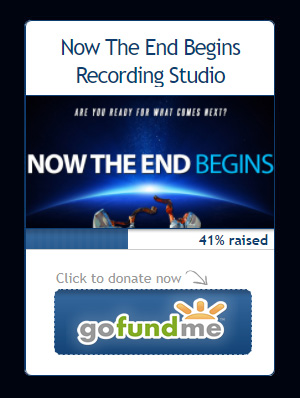 HELP US REACH OUR GOAL OF BUILDING A BIBLE TEACHING RECORDING STUDIO!

As the service begins we are encouraged to get to know each other: people spark up joints and pass them around. Long wisps of smoke float to the ceiling and cover the congregation in a flowery shroud; splutterings of coughs and giggles, the sharp intake of breath on all sides. There are about 30 of us in all, a mixed bag of misfits ranging from a self-proclaimed pothead granny, whose eyes appear to move independently of each other, to a couple of Harold & Kumar wannabes taking selfies at the altar. And then there’s Lee: a former Bible quiz champion, raised in a strict evangelical Christian home, he has the credentials of a preacher if not the look: bushy hipster beard and long messy hair, dark bags under his eyes and the whiff of old smoke on his shirt. It feels more like the start of an AA meeting than a spiritual encounter. But then he starts to speak.

“Being an elevationist [the term they’ve coined for the theology of the new church] means being an explorer,” Lee begins. “Our spiritual journey is one of self-discovery, not one of dogma. We believe there is no one-path solution to life’s big questions. This is simply a supportive place for each one of us to find a pathway to our own spirituality, whatever that may be.” Think of it like the pick ’n’ mix of belief. There is no doctrine, no creed, no scripture or book. Simply choose bits of whatever world religions work for you, or make something up yourself, mix it all together, and see if it tastes good. “There are as many pathways to being an elevationist as there are elevationists,” Lee says. Spirituality shouldn’t be a prescription; it should be an adventure. It’s about seeking, not being told what to find.

It’s an idea that will strike a chord with many people. Church attendance in the UK is on the decline. Last year only 1.4% of the population attended Sunday Anglican services – the lowest level ever recorded. There is a significant demographic of people who simply can’t relate to organised religion or outright oppose it on principle. Being able to explore your own path, within a supportive space, could help fill that widening spiritual deficit.

But here’s where they may lose you. That journey of self-discovery, says Lee, is enhanced by ritual cannabis use. “We have been programmed to behave and think in certain ways,” he says. “Cannabis helps elevationists tear down those false realities.” source