"This has very much been an underground phenomenon up until now, but there are perhaps a 100 people with the chip in Sweden," says Hannes Sjöblad from the Swedish... 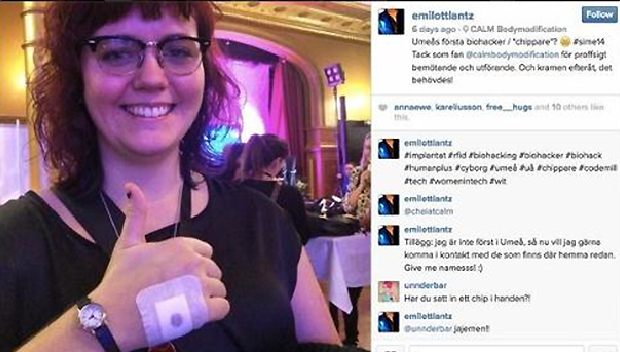 “I don’t feel as though this is the future – this is the present. To me, it’s weird that we haven’t seen this sooner,” she tells The Local. There is evidence that the number of chip-wearers in Sweden is growing rapidly.
by Geoffrey Grider November 19, 2014
NOW THE END BEGINS SHARE:

Emilott Lantz, 25, from Umeå in northern Sweden got a microchip inserted into her hand last week

The bible clearly teaches us that the Church will be taken out in the Rapture before the time of Jacob’s Trouble, the Great Tribulation from Matthew 24, descends upon this earth. But we are so close to that time that we are now living in what can only be described as an overlap of dispensations. As one is closing, the Age of Grace, the other is preparing to take the stage after we leave. The world that will exist after the Rapture will be the age in which people will be forced to take the Mark Of The Beast, or die. So it comes as no surprise that one of the fastest-growing movements in technology is wildly embracing the concept of human implantable microchipping.

Where you spend eternity depends on the choices you make right here and now. God accepts no neutrality, you are either with Him or with the Devil. The future is rushing in on you at a thousand miles per hour, and time is shorter than you can possibly imagine. Choose.

She became a guinea pig during Sime 2014 in Stockholm – a conference about digitalism, the internet, and the future. In line with the goals of the event, participants were offered to get a microchip fitted for free – an opportunity Lantz jumped at.

“I don’t feel as though this is the future – this is the present. To me, it’s weird that we haven’t seen this sooner,” she tells The Local. There is evidence that the number of chip-wearers in Sweden is growing rapidly.

“This has very much been an underground phenomenon up until now, but there are perhaps a 100 people with the chip in Sweden,” says Hannes Sjöblad from the Swedish biohackers group BioNyfiken.

In the last month alone 50 people from the group underwent the procedure.

The technology has previously been used for key tags or chips in our pets’ necks to let them through cat flaps. What is relatively new is inserting the chip in human hands.

The idea is that instead of carrying keys or remembering pins or passwords for our phones or doors, people fitted with microchips can use them to unlock rooms or lockers, by placing their hand against a machine that reads the information stored in the chip.

It was the appeal of minimizing the number of keys she needed to carry around that was the deciding factor for Lantz.

But her decision to go through with the procedure has brought mixed reactions from her friends and family, some saying she’s been foolish while others argue it’s a cool idea. “The technology isn’t new but the subject becomes sensitive just because it’s in the human body,” she says.

Read the rest of the story on Swedish News In English…