‘Pulse Passwords’ Are Next Step Towards Permanent Human Microchip Implantations

Bionym isn’t the only company developing concepts that use the human body as a form of identification. Motorola is working on a temporary tattoo that contains a computer chip... 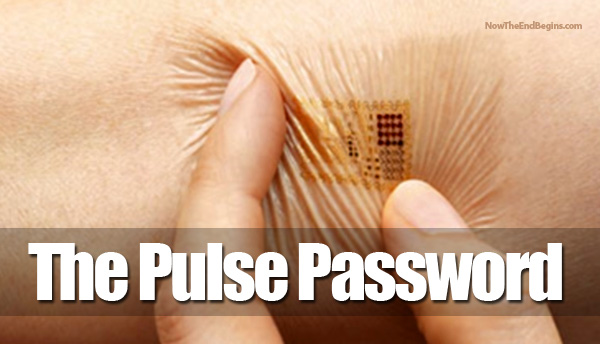 RELATED STORY: The Mark of the Beast and the Implantable RFID Microchip

The book of Revelation says that in the last days, the whole world is controlled by a ‘mark’ that goes inside your body and through it all buying, selling and any type of financial or personal transactions will controlled. The bible goes on to say that this mark will be connected with the worship of a man – the Antichrist. That man has yet to arrive, but say hello to his mark.

“And he causeth all, both small and great, rich and poor, free and bond, to receive a mark in their right hand, or in their foreheads: And that no man might buy or sell, save he that had the mark, or the name of the beast, or the number of his name. Here is wisdom. Let him that hath understanding count the number of the beast: for it is the number of a man; and his number is Six hundred threescore and six.” Revelation 13

CBS New York: Passwords, pin numbers, and credit cards could soon be a thing of the past. Soon, your heart and your body might be used to keep track of just about everything if new technology is able to unlock “pulse passwords”.

Your heartbeat reveals more about you than your health, Bionym chief executive officer Karl Martin explained.

“There’s actually unique characteristics that relate to the size of the heart, the position of the heart, and the physiology surrounding the heart,” he said.

Our heartbeats are as unique to us as our fingerprints and now they are being used to replace passwords, key cards, and bank cards, CBS 2′s Kristine Johnson reported. “It’s like your personal pin number is your heartbeat,” Mashable.com’s Lance Ulanoff said.

The technology could allow you to open a door without a key or have tech gadgets like smartphones and tablets unlock the second that you walk into a room. It sounds like something out of a science fiction movie, but experts say it is the wave of the future.

“It’s going to be a way for us to interact with the world around us without having to constantly identify ourselves,” Ulanoff explained.

Bionym, a Canadian company, developed a wristband to recognize the pattern of an individual pulse. The wristband transmits information that allows the user to do things like withdrawing money without a bank card.

Bionym isn’t the only company developing concepts that use the human body as a form of identification. Motorola is working on a temporary tattoo that contains a computer chip and an antenna.

A pill that dissolves and turns the entire body into a transmitter is also in the works.

Security experts say traditional passwords don’t offer much protection from identity thieves. “If they’re alpha numeric, and usually they are because they have to be easy to remember, they’re also correspondingly easier to break into,” security expert Rohit Sethi explained.

The new technology could pose considerable roadblocks for hackers because heartbeats cannot be replicated.

“You’re not going to have a piece of paper in your pocket with your password. You’re going to have it as part of your body so that is safer,” Ulanoff said. Bionym’s wristband is so in tune with its owner that if somebody did steal it, it would not work. The wristband costs about $100 and is expected to hit stores in 2014. source – CBS News/New York