She told DailyMailTV: 'It was absolutely Bill Clinton. It was shocking - it was definitely a painting of him. It was a very provocative, sexual picture. He was wearing heels, a blue dress and his hand was in a weird position.' The source, who asked to remain anonymous, was visiting Epstein to present a business proposal - an encounter with the pervert which included spotting a girl who seemed to be 14 waiting to see the financier. The woman said she was shocked to catch sight of the portrait through an open door as she walked through the ornate home with her business partner.

Jeffrey Epstein had a bizarre portrait which appeared to be of Bill Clinton in a dress hanging in his Manhattan mansion, DailyMailTV can reveal.

Are you starting to see why convicted pedophile Jeffrey Epstein had to be killed, and killed fast? Bill Clinton is terrified of what will come out, and what is already floating to the surface is quite damning. I was told by someone who works in the Department of Defense in Washington that child pedophile rings are everywhere, it is the greatest secret in Washington today, and the people involved are willing to kill without reservation to keep it a secret.

Jeffrey Epstein joined the 57 others on the Clinton Body Count so the sick secrets of Bill Clinton, Prince Andrew, Alan Dershowitz and all the others who had sex with children wouldn’t be held accountable for their crimes against humanity. But something tells me that this time, things just might be different. Bill Clinton posing in a blue dress wearing red heels is only the tip of the iceberg of the perversion that went on the Lolita Express.

YES IT’S REAL, AND YOU CAN BUY YOUR OWN COPY BY CLICKING HERE!

Wouldn’t it be ironic is the next person to join the Clinton Body Count just might be old Slick Willy himself. Crooked Hillary could order that hit in a heartbeat, and sleep like a baby after she did it.

FROM DAILY MAIL UK: The picture depicting the former president apparently lounging on a chair in the Oval Office, wearing red heels and posing suggestively in a blue dress redolent of Monica Lewinsky was in a room off the stairway of the Upper East Side townhouse.

The painting was secretly snapped inside the pedophile’s lavish $56 million home in October 2012, four years after Epstein completed his sweetheart deal for prostitution of a minor and seven years before he was accused of running a sex trafficking ring of underage girls. 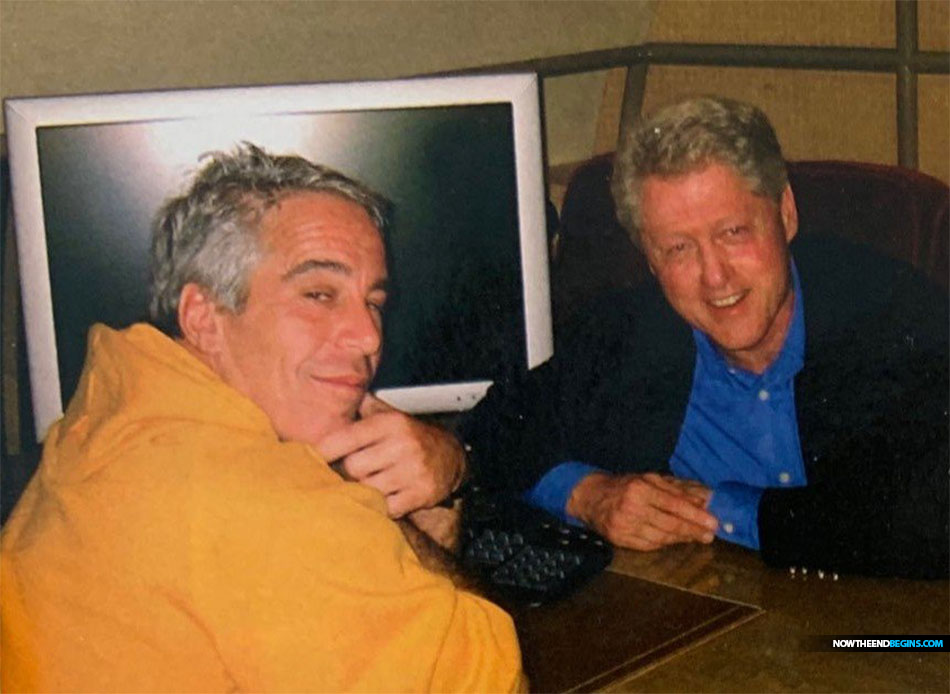 GOOGLE IS PURGING ALL KNOWN PHOTOS SHOWING JEFFREY EPSTEIN AND BILL CLINTON TOGETHER, SHARE IT!

The source, who asked to remain anonymous, was visiting Epstein to present a business proposal – an encounter with the pervert which included spotting a girl who seemed to be 14 waiting to see the financier. The woman said she was shocked to catch sight of the portrait through an open door as she walked through the ornate home with her business partner.

She told DailyMailTV: ‘It was absolutely Bill Clinton. It was shocking – it was definitely a painting of him. It was a very provocative, sexual picture. He was wearing heels, a blue dress and his hand was in a weird position.’

The color of the dress seemed to be a pointed reference to Clinton’s former intern Monica Lewinsky, who a blue dress during their infamous sexual encounter in the White House.

Epstein and Clinton were once friends, with the now 72-year-old flying on the now deceased financier’s private plane, dubbed the Lolita Express, several times and on his own account vising the town house once – making it possible he could have seen the bizarre painting.

Clinton has however denied being on Epstein’s ‘pedophile island,’ Little St. James – a denial which Donald Trump sought to cast doubt on this week.  The presence of the picture is a new twist in the relationship between Clinton, his family and Epstein.

Last month the former president’s office said he had not known anything of Epstein’s crimes and had taken four trips with him in 2002 and 2003 – although flight logs showed that he had taken a total of at least 26 individual flights in the course of those.

One of Epstein’s former sex slaves, Virginia Roberts, claimed she saw Clinton on the island for a dinner held in his honor shortly after he left office, and stood by the claim when questioned under oath.

After the financier’s apparent suicide on Saturday morning, Trump retweeted a suggestion that the Clinton were somehow involved in the death and a link to court documents setting out Roberts’ evidence. READ MORE

Virginia Roberts Giuffre details a plan she said that Ghislaine Maxwell had to have her have a baby for Maxwell and Jeffrey Epstein. The conversation took place after a day of snorkeling near Epstein’s private island in the U.S. Virgin Islands. GRAPHIC WARNING: this video contains very graphic depictions of Jeffrey Epstein’s sex life.