A total of 80 rockets were fired so far from Gaza on rural areas in the South of Israel since Tuesday night. Eight rockets that were fired on Wednesday... 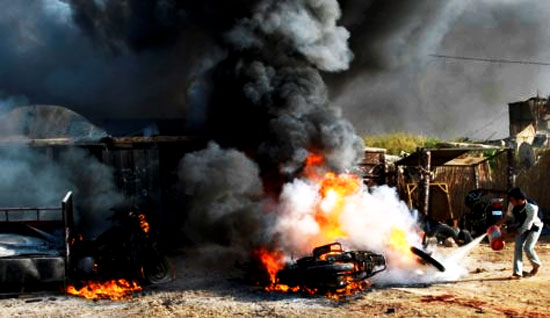 Netanyahu said he decided to accept the recommendation of the defense and home front defense ministries to widen the radius around Gaza that will receive full protection against rocket and mortar fire.
by Geoffrey Grider October 24, 2012
NOW THE END BEGINS SHARE:

Netanyahu said he decided to accept the recommendation of the defense and home front defense ministries to widen the radius around Gaza that will receive full protection against rocket and mortar fire.

A total of 80 rockets were fired so far from Gaza on rural areas in the South of Israel since Tuesday night. Eight rockets that were fired on Wednesday afternoon were intercepted over Ashkelon.

The Iron Dome successfully intercepted a Grad rocket, one of eight struck down since Tuesday night. A barrage of rockets and mortar shells rained down on southern Israel since Tuesday night, injuring five, causing damage and sending local residents fleeing for cover.

In a statement posted on its website, Hamas said it was responsible for rockets, which it said were a response to IDF air strikes from 7:00 to 7:30 a.m. on Wednesday. It also said that on Tuesday it “detonated a roadside bomb near Israeli infantry soldiers east of Khanyounis city.”

Of the five injured, three were foreign workers, two of whom suffered critical injuries and were evacuated via helicopter to Soroka Medical Center. The others were either lightly injured or being treated for shock, according to Israel Radio.

Air raid sirens went off during the attacks and local residents fled for cover. Southern municipalities canceled schools amid the ongoing escalation. Police have heightened patrols around Gaza in the south, including bomb sappers to deal with the heightened threat.

The IAF carried out an air strike around 7 a.m. Wednesday morning following three operations overnight, each striking rocket-launching cells in the northern and southern Gaza Strip. Hamas said that four of its operatives were killed in the strikes, and another three injured. The IDF also launched tank fire at targets in southern Gaza on Wednesday morning.

The explosive was placed on a gate in the Kissufim region, near Kibbutz Ein Hashlosha.

Army paramedics administered first aid, before airlifting the officer, in very serious condition, to the Soroka University Medical Center in Beersheba. Doctors battled to stabilize him.

Prime Minister Binyamin Netanyahu warned that Israel’s response to the bomb attack would be “very hard,” while Barak characterized the attack as a “severe incident.”

The Kissufim region, which borders central Gaza, has become a daily combat zone between Hamas and its affiliated terror groups and the IDF. Palestinian factions regularly plant bombs along the border, fire mortar shells at army positions, and terrorize Israeli farmers with rocket attacks. source – JPost