HOUSTON (AP) — The Southern Baptist Convention is expected to take a stand against the Boy Scouts of America's acceptance of gay members at the denomination's annual meeting in...

The new policy, Wright said, "condones homosexuality as being consistent with the Scout oath of duty to God and moral uprightness."
by Geoffrey Grider June 12, 2013
NOW THE END BEGINS SHARE:

HOUSTON (AP) — The Southern Baptist Convention is expected to take a stand against the Boy Scouts of America’s acceptance of gay members at the denomination’s annual meeting in Houston this week.

The new policy, Wright said, “condones homosexuality as being consistent with the Scout oath of duty to God and moral uprightness.”

Leaders of the nation’s largest Protestant denomination had fought against the change and warned Scouting leaders that allowing gay members could mean Southern Baptist churches would no longer sponsor troops.

Resolutions for the annual meeting were to be presented Wednesday and many observers expect one of them to address the Boy Scouts’ new policy in some way.

Because all Southern Baptist churches are independent, the denomination cannot force a church to drop ties with the Scouts. However, churches occasionally are kicked out of the convention for practices considered incompatible with Southern Baptist beliefs.

Former Southern Baptist President Bryant Wright recently announced that the church where he is pastor, Johnson Ferry Baptist Church in Marietta, Ga., would stop sponsoring a troop after 13 years. Wright explained in a video posted on the church’s website that the problem with the new policy is not that it would allow gay Scouts, but that it would not allow Scout masters to counsel those Scouts to “live a life of sexual purity according to Scripture.”

The new policy, Wright said, “condones homosexuality as being consistent with the Scout oath of duty to God and moral uprightness.”

In all, about 70 percent of the 116,000 Scout units in the United States are sponsored by religious organizations. Many of those groups have decided to continue sponsoring troops. That includes the Church of Jesus Christ of Latter-day Saints, which sponsors more Scout units than any other organization, serving about 430,000 boys.

The United Methodist Church is the second-largest sponsor serving about 363,000 boys. The denomination’s National Director of Scouting Ministries, Larry Coppock, is sending a letter this week that advises leaders to continue sponsoring troops. 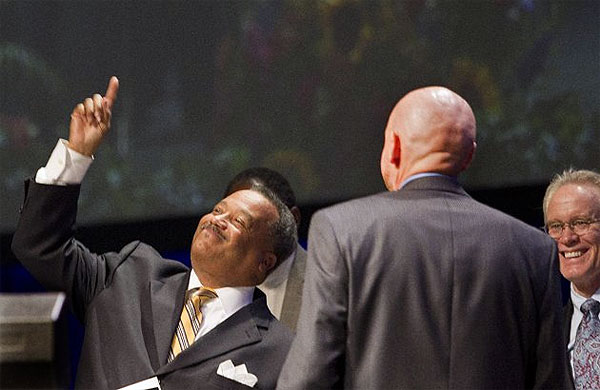 “There are disheartened and disappointed people on both sides of the membership issue, but it is time to move forward and continue to promote scouting as a youth ministry,” he wrote.

On Tuesday, a delegate to the Southern Baptist Convention meeting made a motion asking the group’s Executive Committee appoint a task force to look into Scouting alternatives. That motion was referred to a committee, but leaders could still offer a resolution on the issue Wednesday.

The Southern Baptist Convention already has a youth group for boys called Royal Ambassadors, and there could be a call to expand that program. source – Yahoo News