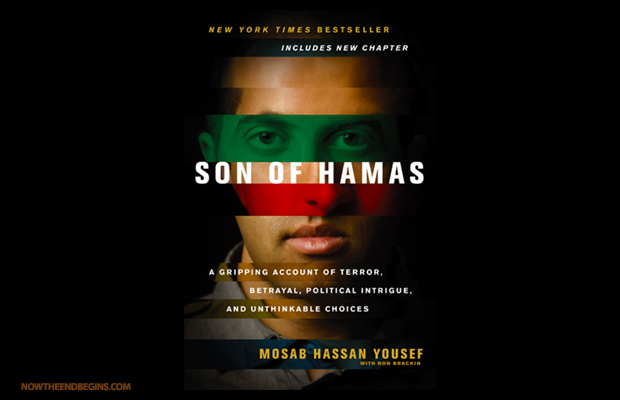 “And he (Ishmael) will be a wild man; his hand will be against every man, and every man’s hand against him; and he shall dwell in the presence of all his brethren.” Genesis 16:12 (KJV)

Four years ago, I had the distinct privilege of meeting Mosab Hassan Yousef, AKA Son of Hamas. He came to America from Israel and Ramallah (his home) to escape persecution by his own people. My husband and I were invited by him to a dinner on Capitol Hill to honor him, given by EMET (Endowment for Middle East Truth) a Jewish organization.

Mosab was a typical Muslim who grew up in the town of Ramallah in the West Bank. Mosab wrote a thrilling book called “Son of Hamas” about being the son of then leader of Hamas, Sheikh Hassan Yousef.

Mosab became a double agent, working for the Shin Bet in Israel.

He had seen enough fighting and death, and knew that much of it was provoked by the Muslims. He also converted from Islam to Christianity. If you have not read his book, I highly recommend it.

Wherever I go in the world, people ask me about ISIS. And I advise them to ignore the endless debates about the peaceful versus violent nature of Islam and take a long, hard look at the Islamic State. ISIS is Islam, exposed in all its cruelty and ugliness, unchanged since Muhammad.

The true Five Pillars of Islam are: Slaughter, Intolerance, Oppression, Hatred, and Global Dominion, because Muhammad was a slaughterer, intolerant, oppressive, hateful, and drove his armies to destroy everything and everyone that stood in the way of his establishment of a world caliphate.

Muhammad said to the people of Mecca, “I have brought slaughter to you,” then he beheaded every Jewish male, young and old.

When the leader of the Jewish Bani al-Nadir tribe refused to reveal the location of his tribe’s treasures, Muhammad ordered his soldiers to “Torture him until you extract what he has.” So a fire was built on the chest of Kinanah bin al-Rabi. Again, when some of his men resisted Muhammad’s planned attack against the Byzantines at Tabuk, the prophet commanded that they be burned alive in the house where they were meeting.

ISIS enslaves and rapes women because Muhammad did, even when he took a six-year-old little girl as his wife and consummated their union when she turned nine.

ISIS mutilates and crucifies men, women, and children because its prophet did. When ISIS hurled a homosexual man from a tower, and the crowd waiting below stoned him to death after they saw that he had survived, they were only following the example of their prophet who stoned homosexuals.

The only difference between 1,400 years of slaughter by Muslims, who follow the practices of Muhammad, and the carnage carried out today by ISIS is that today’s atrocities are broadcast throughout the world by social media.

Unexpectedly, social media has also made ISIS a blessing to the Muslim world, enabling Muslims to see the true face of Islam.

But thanks to ISIS, you can free yourself from the lies of Hezbollah, Hamas, and Al-Jazeera, if you have the courage. They cannot protect you from a western conspiracy, because there is none. Your enemy is Islam, not America.

When you recognize that ISIS is Islam, you free yourself from the naiveté of world leaders who tell you that ISIS is an anomaly of Islam, leaders that, I am sorry to say, include US President Barack Obama, who told CNN’s Fareed Zakaria recently that, “There is an element growing out of Muslim communities in certain parts of the world that have perverted the religion, have embraced a nihilistic, violent, almost medieval interpretation of Islam.”

But it is those who deny that Islam is “nihilistic, violent, almost medieval” who have perverted the religion.

ISIS is Islam. Religion by the sword. Religion by intolerance and violence. Religion commanded by its prophet to conquer the world, behead apostates, mutilate thieves, crucify nonmuslims, and stone everyone that engages in sexual relations that disagree with Muslim laws and practices.

ISIS has torn the mask from Islam, giving the Muslim world a choice for the first time in fourteen centuries. Choose Islam, and you choose ISIS, because they are indistinguishable. Reject ISIS, and you reject Islam, because they are one.

ISIS must be stopped, yes. But the Islamic State is not an international problem. It is an Arab problem. And the armies of Jordan, Egypt, UAE, and others are well equipped to deal with it. Western intervention will only create more chaos and reinforce the illusion of a Middle East/Western conflict.

Like Libya and Yemen, ISIS is a tribal conflict, not a political one. The Islamic State is the Sunni backlash against domination and persecution by minority Shi’a Muslims in Iraq and the ruling Alawite minority of Syria.

Islam hates everything that is not Islam. And just as fresh water and salt water cannot flow from the same spring, love and goodness cannot flow from a religion that is established on hatred and violence.

As long as Muslims refuse to take a strong and aggressive stand against terrorism, they must share responsibility for the continuing atrocities. The hour has come for every Muslim to choose to be human or inhuman, noble or criminal.” [1] – Son Of Hamas Blog

Brethren, pray for Mosab. Pray for the Lord to protect him. For Mosab to speak out in this way against ISIS, surely makes him a prime target.

Thank You Lord for this man who came to You from Islam. Protect him and keep him in Your care. In Jesus’ Name I ask. Amen.