United Nations Secretary General Ban Ki-moon called on Israel Wednesday to halt settlement building in the West Bank and put a stop to all forms of violence and incitement,... 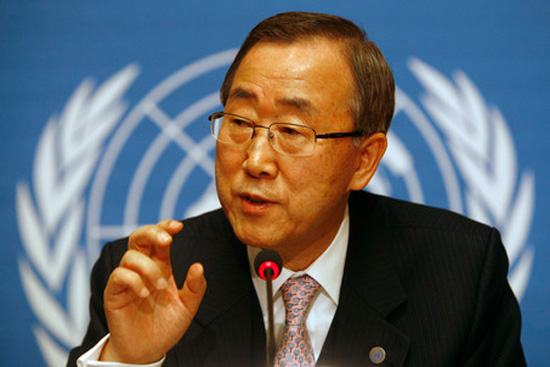 United Nations Secretary General Ban Ki-moon called on Israel Wednesday to halt settlement building in the West Bank and put a stop to all forms of violence and incitement, the UN News Center reported. Speaking in Uruguay at the UN Latin American and Caribbean Meeting in support of Middle East peace Ban said it was a “crucial time” for the Israeli-Palestinian peace process.

"Let them all be confounded and turned back that hate Zion." Psalm 129:5...and that includes YOU, Mr. General Secretary

“Time is of the essence in realizing the two-State solution, ” Ban said, “the occupation that started in 1967 is morally and politically unsustainable, and must end. The Palestinians have a legitimate right to the establishment of an independent and viable State of their own.”

“The target dates for reaching an Israeli-Palestinian agreement on permanent status issues and completing the Palestinian Authority’s two-year State-building program are fast-approaching. Yet, the Israeli-Palestinian negotiations remain at a worrying standstill. We must intensify efforts to break the deadlock,” he added. Negotiations between Israel and the Palestinians hit a standstill in September after Israel resumed building in the West Bank following a moratorium on settlement building. source – Haaretz