Now NTEB has made a chilling discovery - Is this Harold Camping's suicide note? On May 22, Family Radio with Harold Camping is a failed enterprise. There is no... 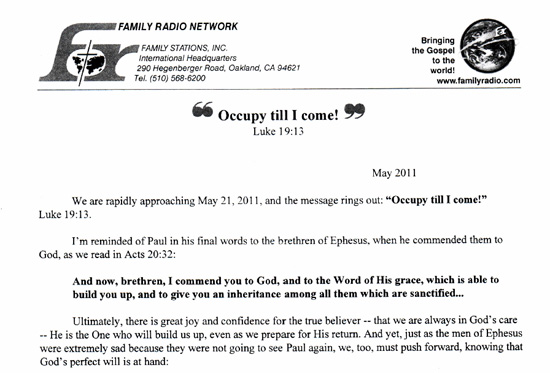 Is Harold Camping planning on his own personal “rapture” via suicide?

Being a cult leader comes with a price. Throughout history, cult leaders have often paid with their own lives to stand for the distorted “truths” that they teach. Jim Jones in Jonestown with the cyanide Kool-Aid and David Koresh in an FBI firestorm come to mind. The way of the transgressor is hard, says the bible. And the ironic part of cults is that while they claim to ‘speak for God’, they are really transgressing His revealed word, and that takes a terrible toll on the mind and soul. Sometimes they sink so deeply into their delusions that suicide seems like the only way out.

Now NTEB has made a chilling discovery – Is this Harold Camping’s suicide note?

Why is he saying goodbye to the people that would be getting raptured with him unless he was planning on going alone?

Harold Camping has encouraged people to cash in savings accounts, kid’s college funds and sell their houses to pay for the Judgement Day banners, billboards and RV’s plastered all over the country. Many people, on May 22, will lack the financial resources to continue living the lives they used to know prior to getting involved in Harold Camping’s grand vision of a self-proclaimed day of judgment. How could he face those people on Monday morning, what would he say to them knowing he was personally responsible for ruining their lives? With these questions in mind, a newly-discovered email sent by Harold Camping to Family Radio employees may be fraught with more meaning than previously thought. (click here to read the full PDF.)

The letter ends with a cryptic plea for his co-workers to “continue to stand with us to proclaim the Gospel through Family Radio.” Now, that leads one to wonder who is going to be left behind out of his group to continue working at the radio station? Wouldn’t they all be going up to Heaven with him? It doesn’t make any sense unless it is his goodbye note for when he commits suicide after his prophecy fails to materialize on May 21. However sad that would be, it would be very much in line for the fate of a modern-day cult leader, which he has clearly become.

Whatever the result of all this, one thing will be for sure. On May 22, Family Radio with Harold Camping is a failed enterprise. There is no way he could remain in power there after this second failed attempt at prophecy. Too many lives will have been ruined, and too much trust lost. The only way the radio station could continue would be without him, and he knows it. And for this reason, we think that this note may be his suicide goodbye note.

I pray that this is not the case, and that Harold finally does for himself what he tells others to do – thrown himself upon a merciful God, and ask for His forgiveness.