No state has defaulted on its debts since the Great Depression and even after the last recession only a handful of cities went bankrupt, since governments have broad ability to raise taxes. “I would certainly be in favor of allowing states to use the bankruptcy route,” Senate Majority Leader Mitch McConnell said Wednesday in a response to a question on the syndicated Hugh Hewitt radio show. “It’s saved some cities, and there’s no good reason for it not to be available.”

Senate Majority Leader Mitch McConnell said Wednesday he favors allowing states struggling with high public employee pension costs amid the burdens of the pandemic response to declare bankruptcy rather than giving them a federal bailout.

With each passing day, the global outlook due to the COVID-19 Plannedemic grows bleaker and bleaker, as death tolls continue to rise and economies are either teetering on the edge of failure or collapsing outright. Here in America, our financial outlook is beyond grim, even after an historic $2 trillion dollar coronavirus stimulus bailout. Now today we have Senate Majority Leader Mitch McConnell telling states they should go bankrupt. Should that happen, overnight America will cease to be a superpower. It will happen just that fast.

“Behold, the nations are as a drop of a bucket, and are counted as the small dust of the balance: behold, he taketh up the isles as a very little thing.” Isaiah 40:15 (KJB)

For the past ten years, we here at NTEB having been warning you that the Deep State was going to collapse America, and in fact that sentiment was incorporated into our original page banner as you see below. God gave us an amazing window of grace with the election of Donald Trump, but that window looks like it’s in the process of closing right now. Please take a moment, you have the time during the lockdown, and I invite you to examine every element of this graphic I made ten years ago. Look at the images, read all the words, and understand that all these things that God put on my heart when He told me to start Now The End Begins are all coming to pass here in 2020. I told you it was coming, now it’s here. Ready or not.

CLICK IMAGE TO SEE HOW NOW THE END BEGINS APPEARED BACK ON FEBRUARY 25, 2010, YOU WILL NOTE OUR MESSAGE HAS NOT CHANGED ONE JOT OR TITTLE, IN FACT WE’VE DOUBLED DOWN.

FROM MSN: “I would certainly be in favor of allowing states to use the bankruptcy route,” Mitch McConnell said Wednesday in a response to a question on the syndicated Hugh Hewitt radio show. “It’s saved some cities, and there’s no good reason for it not to be available.”

The host cited California, Illinois and Connecticut as states that had given too much to public employee unions, and McConnell said he was reluctant to take on more debt for any rescue.

“My guess is their first choice would be for the federal government to borrow money from future generations to send it down to them now so they don’t have to do that,” he said. “That’s not something I’m going to be in favor of. I said yesterday we’re going to push the pause button here, because I think this whole business of additional assistance for state and local governments needs to be thoroughly evaluated,” Mitch McConnell added. 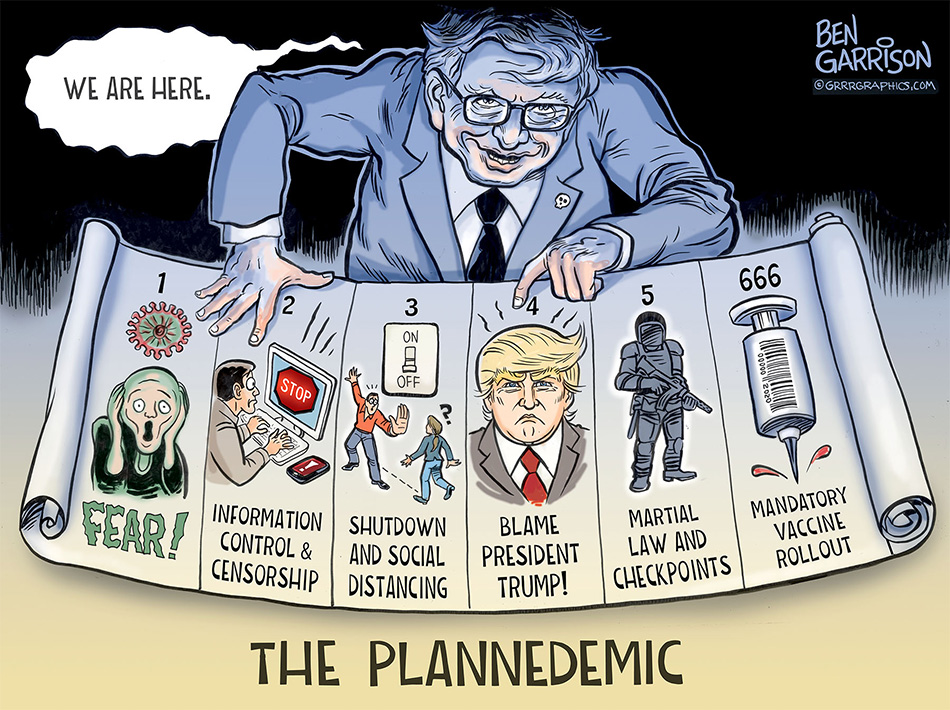 WELCOME TO THE PLANNEDEMIC, WHAT THE NEW WORLD ORDER CALLS THE ‘NEW NORMAL’ AND THEY TELL US IT WILL NOT CHANGE UNTIL A GLOBAL VACCINE IS GIVEN

“You raised yourself the important issue of what states have done, many of them have done to themselves with their pension programs,” he said. “There’s not going to be any desire on the Republican side to bail out state pensions by borrowing money from future generations.”

A reporter asked Gov. Cuomo what he’d say to New Yorkers who want to go back to work because they’re running out of money, to which he replied, “economic hardship doesn’t equal death”

“You want to go to work? Go take a job as an essential worker” he added https://t.co/BgwoOZsQRy pic.twitter.com/WxGQxtg49p

The idea of allowing states to file for bankruptcy was raised in the wake of the last recession. It drew widespread disdain from Wall Street investors, public employee unions and both Republican and Democratic governors, who said it would unsettle the bond market and cause even the most fiscally sound states to face higher interest rates because of the risk the debt could be wiped out in court.

No state has defaulted on its debts since the Great Depression and even after the last recession only a handful of cities went bankrupt, since governments have broad ability to raise taxes. READ MORE