See The Place They Call The Doorway To Hell, The Erta Ale Lava Lake (VIDEO)

The word Hell appears 54 times in the King James Bible, and in every place that it appears it says the same thing. Hell is a place of torment,... 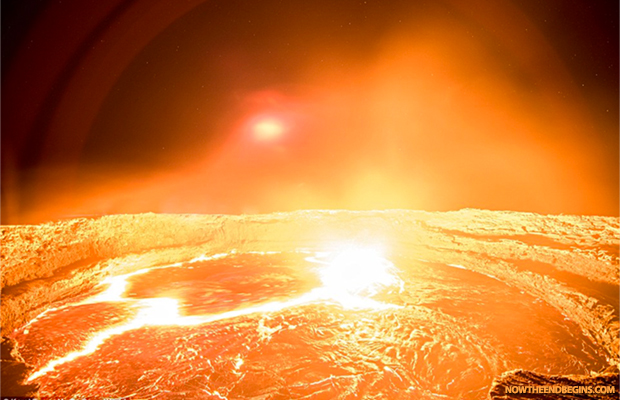 “For a fire is kindled in mine anger, and shall burn unto the lowest hell, and shall consume the earth with her increase, and set on fire the foundations of the mountains.” Deuteronomy 32:22 (KJV)

The word Hell appears 54 times in the King James Bible, and in every place that it appears it says the same thing. Hell is a place of torment, trouble, and it is filled with an eternal burning that can never be quenched.

‘The heat was immense, when I got to an edge of the crater, it was unbearable. After couple of seconds, my facial skin was so hot, I had to get away.”

The prophet Isaiah tells us that in the Millennial Reign of the Messiah, Jesus Christ, there will actually be an open doorway in Jerusalem that will allow inhabitants of the Earth to see inside of Hell:

“And they shall go forth, and look upon the carcases of the men that have transgressed against me: for their worm shall not die, neither shall their fire be quenched; and they shall be an abhorring unto all flesh.” Isaiah 66:24 (KJV)

So it is with great fascination that we present to you today the place that is called the Doorway To Hell on Earth, Erta Ale in Ethiopia.

If we must imagine the fiery depths of Hell, the mental image can’t be far from these incredible images by Karel Tupy of Ethiopia’s Erta Ale, the world’s oldest continuously active lava lake.

Photographer Tupy, 35, says he feared his camera would melt from the overwhelming heat of the lava as he captured the daunting scenes of the 150-ft wide basalt volcano.

‘The view is simply staggering,’ said the 35-year-old. ‘Lava inside the volcano is constantly moving, bubbling and bursting.’  ‘The heat was immense, when I got to an edge of the crater, it was unbearable. After couple of seconds, my facial skin was so hot, I had to get away.

‘There was even a point where I was afraid my camera was going to melt.’

The lava lake was so intense, and so hot that the photographer could not take it for more than a few seconds up close. How much worse will the actual Hell be for those who find themselves there 30 seconds after they die?

“Then shall he say also unto them on the left hand, Depart from me, ye cursed, into everlasting fire, prepared for the devil and his angels: “ Matthew 25:41 (KJV)

Oh, I know death doesnt “scare you” now. Not now while you’re healthy, life is good and death seems so far off and remote. But as sure as the sun rises, your end will arrive, and so much sooner than you think. And as you step out into a Christ-less eternity and realize, too late, that your sins are still unpaid for, you WILL come face to face with the Jesus you think you don’t need now. And in THAT day, as you have rejected Him here, He will also reject you there. And you will burn beyond the end of forever, with no one to hear your cries.
—
You don’t have to go to Hell, click here to get free fire insurance.