Faced with one of the most consequential meetings of his young tenure as prime minister, Greece’s Alexis Tsipras on Wednesday resorted to the same trait that brought his hard-left... 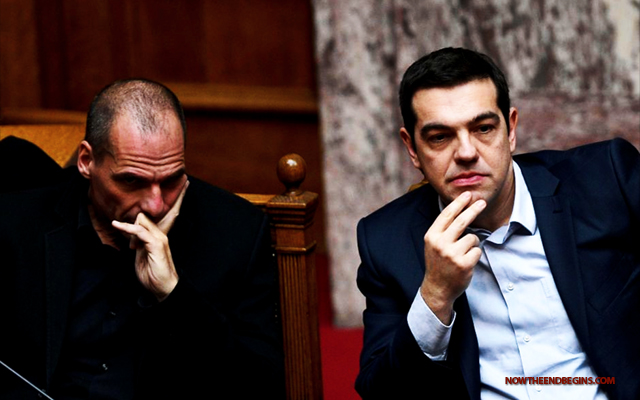 Faced with one of the most consequential meetings of his young tenure as prime minister, Greece’s Alexis Tsipras on Wednesday resorted to the same trait that brought his hard-left government to power: defiance.

“And now will I shew thee the truth. Behold, there shall stand up yet three kings in Persia; and the fourth shall be far richer than they all: and by his strength through his riches he shall stir up all against the realm of Grecia.” Daniel 11:2 (KJV)

Alexis Tsipras watchers continue to be fascinated with the rising star of Greek politics as he faces the biggest hurdle of his young administration. Greece, awash in debt and out of time, is facing not only bankruptcy but removal from the EU. Is Alexis Tsipras worried? Not at all. In fact, he’s angry.

As he prepared to leave Athens for a meeting with Jean-Claude Juncker, the European Commission president, Mr Tsipras brushed aside a new — and possibly final — bailout offer hammered out by his country’s creditors after an emergency meeting of the EU’s most powerful leaders on Monday night.

Instead, he promised to force his adversaries to “accede to reality”, saying: “I am going to discuss the proposal of the Greek government. I am confident that the political leadership of Europe will do what needs to be done.” source

Tsipras, whom you’ll remember, has some powerful friends for someone so new to politics. From meeting with Pope Francis to discuss a peace treaty between Israel and the Palestinians, counting New World Order financier George Soros as a business partner, to closed door meetings with high-level Russian officials discussing the capabilities of a strategic cooperation, intrigue is it an all time high.

Add to all this he refused to take his oath of office on the Bible, is an avowed atheist, and talks about “ushering in global peace”, love, harmony and social justice. and it’s enough to make you wonder who he really is. What is his real agenda, and why are Bible prophecy watchers so interested in everything he says and does?