Russia Now Says Violence In Ukraine Is ‘Beyond Our Control’

The Kremlin said yesterday it was receiving "thousands" of pleas for help from Ukraine, warning that it could not control pro-Russian separatists in the country and now required help... 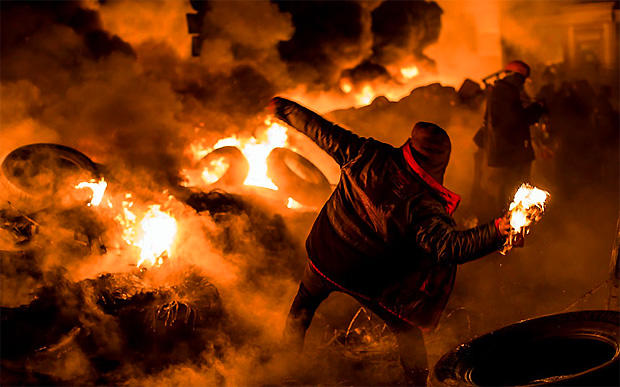 Kiev, Ukraine – The Kremlin said yesterday it was receiving “thousands” of pleas for help from Ukraine, warning that it could not control pro-Russian separatists in the country and now required help to resolve the worsening violence.

As Russian troops continued to conduct exercises near the Ukrainian border and the US Secretary of State, John Kerry, demanded the Russian government do more to defuse the situation or risk further economic sanctions, a Kremlin spokesman, Dmitry Peskov, was quoted as saying that Russia had “lost its influence” over separatists in the region.

A former British ambassador to Moscow warned that the Kremlin’s claims not to be orchestrating the situation should not be dismissed.

Speaking in Moscow yesterday, Mr Peskov said: “People are calling in despair, asking for help. The overwhelming majority demand Russian help. All these calls are reported to President Vladimir Putin.”

He made clear that the Russian government blamed the West for the worsening situation, while stressing the need for “dialogue” towards a peaceful resolution. “Kiev and its Western sponsors are practically provoking the bloodshed and bear direct responsibility for it. Those who recognise this junta as a legal power become an accomplice to this crime.”

Ukraine is scheduled to hold a presidential election on 25 May. But Mr Peskov said it would be “absurd” for it to go ahead under the current conditions of “military action, a punitive operation and mass killings”.

Mr Kerry, currently in Africa, spoke with his Russian counterpart, Sergei Lavrov, to warn of further economic penalties if the situation did not stabilise.

“It’s important for Russia to withdraw support for the separatists,” he said. “If those supported by Russia continue to interfere with the elections, regrettably there will have to be sanctions, including the possibility of – the reality of – sector sanctions.”

Mr Lavrov responded by placing the responsibility for defusing the crisis on the West. The US, he said, must use its influence in Kiev.

A former British ambassador to Moscow warned that the Kremlin’s claims not to be orchestrating the situation should not be dismissed. Sir Rodric Braithwaite told The Independent on Sunday: “It may be true that Putin is losing control of events in eastern Ukraine and that he fears being sucked into a situation which could turn out to be unmanageable. It is unlikely that he has abandoned the proposition that he put forward weeks ago, that Ukraine needs a new constitution of a federal kind with specific rights for the Russian-language population in the East … The West will need to think how to respond to these propositions if a constructive negotiation for the benefit of the Ukrainians themselves is to be got under way.” source – Independent UK