As Russia Increases Ukraine Pressure, Call For All Jews To Be Registered With State Issued

A leaflet distributed in Donetsk, Ukraine calling for all Jews over 16 years old to register as Jews marred the Jewish community's Passover festivities Monday (Passover eve), replacing them... 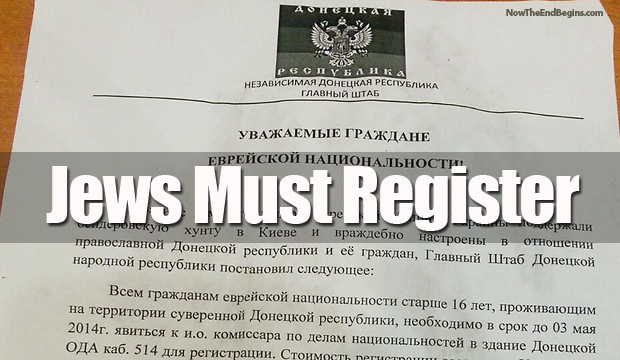 The leaflet demanded the city's Jews supply a detailed list of all the property they own, or else have their citizenship revoked, face deportation and see their assets confiscated.
by Geoffrey Grider April 17, 2014
NOW THE END BEGINS SHARE:

Donetsk, Ukraine: A leaflet distributed in Donetsk, Ukraine calling for all Jews over 16 years old to register as Jews marred the Jewish community’s Passover festivities Monday (Passover eve), replacing them with feelings of concern. Donetsk, a Ukraine province with 4.3 million people – 10 percent of Ukraine’s population – and 17,000 Jews, is home to much of the country’s heavy industry, and is thus the biggest prize of the eastern regions where pro-Russian separatists have captured government buildings in the past week.

The leaflet demanded the city’s Jews supply a detailed list of all the property they own, or else have their citizenship revoked, face deportation and see their assets confiscated.

The leaflet, signed by Chairman of Donetsk’s temporary government Denis Pushilin, was distrbiuted to Jews near the Donetsk synagogue and later in other areas of the city where pro-Russians activists have declared Donetsk as an independent “people’s republic”, defying an ultimatum from Kiev to surrender.

The leaflet was written in Russian and had Russia’s national symbol on it, as well as the Donetsk People’s Republic insignia.

“Dear Ukraine citizens of Jewish nationality,” the flyer began, “due to the fact that the leaders of the Jewish community of Ukraine supported Bendery Junta,” a reference to Stepan Bandera, the leader of the Ukrainian nationalist movement which fought for Ukrainian independence at the end of World War II, “and oppose the pro-Slavic People’s Republic of Donetsk, (the interim government) has decided that all citizens of Jewish descent, over 16 years of age and residing within the republic’s territory are required to report to the Commissioner for Nationalities in the Donetsk Regional Administration building and register.”

The leaflet detailed what type of documents the Jewish citizens would need to supply: “ID and passport are required to register your Jewish religion, religious documents of family members, as well as documents establishing the rights to all real estate property that belongs to you, including vehicles.”

If the message was not made clear enough, the leaflet further stipulated the consequences that would come to those who failed to abide by the new demands: “Evasion of registration will result in citizenship revoke and you will be forced outside the country with a confiscation of property.”

To add insult to injury, the leaflet demanded the Jews pay a registration fee of $50.

According to Alex Tenzer, a Kiev native and one of the directors of the National Association of Immigrants from the Former USSR in Israel, said: “The Jewish-Ukrainian leadership supports Ukraine’s new government, but it’s hard to tell whether the leaflet is valid or simply a provocation.

“Anyway, the material is very anti-Semitic and reminds me of the kind of material distributed by the Nazis in WWII.”

Emanuelle Shechter, from Israel, received a copy of the leaflet via Whatsapp from his friends in Donetsk. “They told me that masked men were waiting for Jewish people after the Passover eve prayer, handed them the flyer and told them to obey its instructions.”

Olga Reznikova, a member of Donetsk’s Jewish community, told Ynet that “we do not know if the leaflet was spread by pro-Russian forces or someone else, but it did manage to create quite a fear. This reminds me of texts from darker times. Other members of the Jewish community I spoke with are not afraid, but it is unpleasant. source – YNET News