The Bible Does Not Record Jesus Christ ‘Falling’ While Carrying The Cross At Any Point Going To Calvary, That Idea Is Roman Catholic Nonsense

Herein lies the wicked deceit of the Roman Catholic Church, the Whore of Babylon. They are forced to admit that the idea of Jesus "falling" is not found in scripture, yet they go right on and compel you to do a devotion dedicated to the premise that Jesus fell not once, not thrice, but seven times on His way to Calvary. So why does the Vatican insist on promoting this nonsense? Because it brings Jesus down a notch or two, presenting you with a slightly imperfect, fallible Jesus who is incapable of completing the task assigned to Him.

No where in the bible does it say or even imply that Jesus could not carry His own cross, that is entirely speculation on the part of the Roman Catholic Church.

The Roman Catholic Church teaches many things “contrary to the name of Jesus of Nazareth.” One of their most-popular false teachings is something called ‘The Stations of the Cross’, a recurring ritualistic practice I was compelled to observe many times in my 29 years as a Roman Catholic. The ‘stations of the cross’ are only too eager to show you how Jesus Christ was too weak to carry His own cross, and fell down, repeatedly, in the process. To the majority of Catholics around Easter time, this ritual brings tears to their eyes. The only problem is, it’s not biblical.

“And as they led him away, they laid hold upon one Simon, a Cyrenian, coming out of the country, and on him they laid the cross, that he might bear it after Jesus. And there followed him a great company of people, and of women, which also bewailed and lamented him. But Jesus turning unto them said, Daughters of Jerusalem, weep not for me, but weep for yourselves, and for your children.” Luke 23:26-28 (KJB)

When we read the passage in Luke 23 that shows Simon, the Cyrenian, stepping into to carry the cross for Jesus at the order of the Romans, we do not see a ‘crippled Jesus’ lying on the ground. We see nothing of the kind. We see a fiery Jesus Christ, and He is warning them of the judgment to come, for them. He is not acting in any way like someone who is beaten down and unable to continue and carry His cross. No where in the bible does it say or even imply that Jesus could not carry His own cross, that is entirely speculation on the part of the Roman Catholic Church. But they don’t teach it as speculation, they teach it as fact which it absolutely is not.

The Compass, the official newspaper of the Catholic Diocese of Green Bay, Wisconsin, says this about the history of the stations of the cross: “… the stations we know today developed gradually from around the 14th century until 1731, when Pope Clement XII ordered the number of stations set at 14. (Prior to that, there had been various Stations of the Cross, ranging from 7 to 37 in number.) However, the three falls depicted in the current stations are not found in Scripture. Over the history of the development of the Stations of the Cross, a related devotional practice developed known as “The Seven Falls.” source 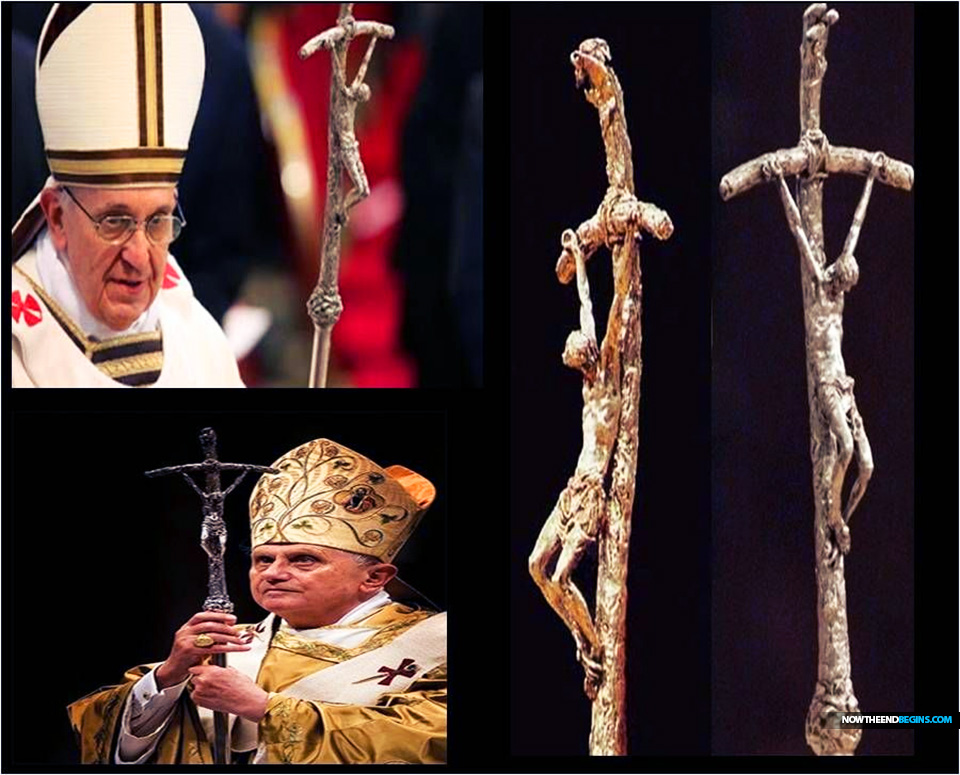 THIS IS HOW THE ROMAN CATHOLIC CHURCH WANTS YOU TO SEE JESUS, AS A WEAK, FRAIL BEATEN MAN WHO COULD NOT CARRY HIS OWN CROSS. NONSENSE!!

Herein lies the wicked deceit of the Roman Catholic Church, the Whore of Babylon. They are forced to admit that the idea of Jesus “falling” is not found in scripture, yet they go right on and compel you to do a devotion dedicated to the premise that Jesus fell not once, not thrice, but seven times on His way to Calvary. So why does the Vatican insist on promoting this nonsense? Because it brings Jesus down a notch or two, presenting you with a slightly imperfect, fallible Jesus who is incapable of completing the task assigned to Him.

Simon, the Cyrenian, is a beautiful picture of a believer who is told that they must also ‘carry the cross’ if they are to be a disciple of Jesus Christ. Jesus did not need the assistance, but He offers it to us as a means by which we can suffer, not for salvation, but for the glory of God. Luke said that Simon “might bear it after Jesus”, you and I who are saved are called to do the exact same thing. Now there’s a devotion worth thinking about.

“And he said to them all, If any man will come after me, let him deny himself, and take up his cross daily, and follow me. For whosoever will save his life shall lose it: but whosoever will lose his life for my sake, the same shall save it.” Luke 9:23,24 (KJB)

In conclusion, we rightly come to see that Jesus did not fall, He did not stumble on the way to Calvary, just the opposite. As He traveled to where He would willingly lay down His life as a payment for sin, He is preaching, warning, and taking the entire weight of the world on His own back. That God allowed Simon the Cyrenian to “get in on the action” is a beautiful picture of God’s grace. Don’t get your doctrine from movies like “The Passion”, and from counterfeit churches like the Roman Catholic Church. Get saved, and get your doctrine from your King James Authorized Version Holy Bible. That’s where the truth is. Jesus not only didn’t fall on His way to Calvary, you won’t fall either if you trust Him to get you safely Home to Heaven.

“Now unto him that is able to keep you from falling, and to present you faultless before the presence of his glory with exceeding joy, To the only wise God our Saviour, be glory and majesty, dominion and power, both now and ever. Amen.” Jude 1:24,25 (KJB)

WHY WAS THE PAPAL AUDIENCE HALL BUILDING AT THE VATICAN CONSTRUCTED IN THE SHAPE OF A GIANT REPTILE?

Pope Francis “preached” a message in NYC where he declared that Jesus Christ was a ‘failure on the cross’. The reaction from his all-Catholic audience? They burst into excited applause, watch and see for yourself.