Robin Williams acknowledged that he had opened himself up to transformative demonic powers that aided him on stage. Without the aid of such demonic powers, it is likely that... 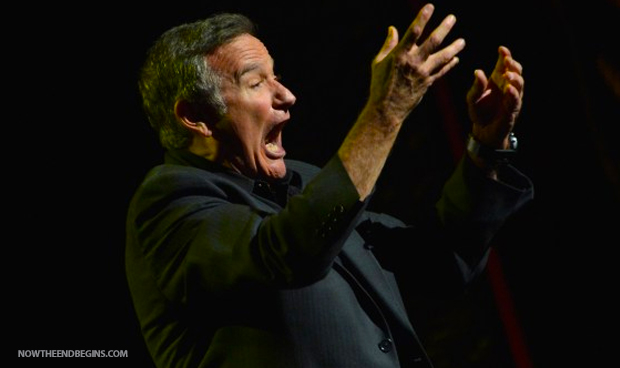 Fame in Hollywood often comes with a deadly price

“And he asked him, What is thy name? And he answered, saying, My name is Legion: for we are many.” Mark 5:9

Suicide is not the unpardonable sin, neither is murder, divorce, fornication, homosexuality, drug addiction or anything else you could possibly do. No, the only sin that God cannot forgive is the one of rejecting the free gift of salvation that is found only in Jesus Christ. The generic “higher power” many meet in rehab may get you sober for a time, but will damn your eternal soul if you die without meeting Jesus in particular, and not just “god” in general.

Don’t make the fatal mistake of confusing sobriety with salvation.

Everybody is currently talking about Robin Williams and his tragic suicide. Many are puzzled as to how a man, who made so many people laugh, could be so depressed that he would violently end his life. What people are not learning is the deeper truth about the insidious forces that tormented Robin Williams and drove him to suicide.

“Yeah! Literally, it’s like possession ‑ all of a sudden you’re in, and because it’s in front of a live audience, you just get this energy that just starts going…” – Robin Williams

Williams also recognized that these powers had manifested a very evil influence on stage and that there could be a hefty price to pay for their assistance. Williams told James Kaplan of US Weekly:

“Yeah! Literally, it’s like possession ‑ all of a sudden you’re in, and because it’s in front of a live audience, you just get this energy that just starts going…But there’s also that thing ‑ it is possession. In the old days you’d be burned for it…But there is something empowering about it. I mean, it is a place where you are totally ‑ it is Dr. Jekyll and Mr. Hyde, where you really can become this other force. Maybe that’s why I don’t need to play evil characters [in movies], ’cause sometimes onstage you can cross that line and come back. Clubs are a weird kind of petri dish environment. I mean, that’s where people can get as dark as they can in comedy ‑ in the name of comedy, be talking about outrageous stuff and somehow come out the other side. I mean, that’s one place where you really want to push it” (Robin Williams, “Robin Williams,” by James Kaplan, US Weekly, January, 1999, p. 53).

Williams’ last statement quoted above answers the question as to why the demonic powers use entertainers. Their goal is to promote evil and darkness and increase mankind’s rebellion against God.

Williams went on to say on the heels of that admission:

“The people I’ve ad­mired ‑ Jonathan Winters, in his best days, was out. Gone. But the price he paid for it was deep”

Sadly, it seems that the price Robin Williams has now paid is just as deep as that of his idol, Jonathan Winters. In fact, in the same US Weekly Interview, James Kaplan says:

“With a gift for mimicry and improvisation that verged on demonic possession, Williams could even approach the artistry of his idol Jonathan Winters—a man whose genius took him, once or twice, over the edge into mental illness. Williams’ own version of hell has been extensively chronicled”.

Like Robin Williams, Jonathan Winters had to contend with the tormenting demonic powers he utilized for fame and fortune. “These voices are always screaming to get out,” Winters told the Fort Worth Star-Telegram, further admitting “They follow me around pretty much all day and night.”

At the height of Winter’s success, he voluntarily committed himself to a psychiatric hospital for eight months. Winters would later claim that if he were not careful, the authorities would put him back in the  “zoo,” an obvious reference to the mental institution. Winters, like Williams, often fell into deep depression and struggled with heavy drinking.

While many only knew Robin Williams to be what they considered a somewhat “family friendly” actor, he was one of the most successful crude stand-up comics who ever lived. It was during his stand-up where he was most able to tap into what he calls “possession…Dr. Jekyll and Mr. Hyde… that’s where people can get as dark as they can in comedy ‑ in the name of comedy” .

It was in Williams’ stand-up where he would go into his manic, stream-of-consciousness rants filled with vulgar language, perverse sexuality and the glorification of illicit drugs and drunkenness. Many people express shock after seeing Williams’ stand-up, not knowing his act was so perverse. Comedians, like many famous musicians, pay the price for their fame by becoming enslaved to the demonic forces that possess and torment them.

Jim Morrison, the frontman of America’s most successful band in the 60’s, admitted that he had to drink “to silence the constant voices of the demons” (James Riordin, “Break on Through: The Life and Death of Jim Morrison,” p. 23). The Door’s photographer, Frank Lisciandro, stated that,“Jim drank to quiet the ceaseless clamor of the demons, ghosts and spirits. He drank because there were demons and voices and spirits shouting inside of his head and he found that one of the ways to quell them was with alcohol” 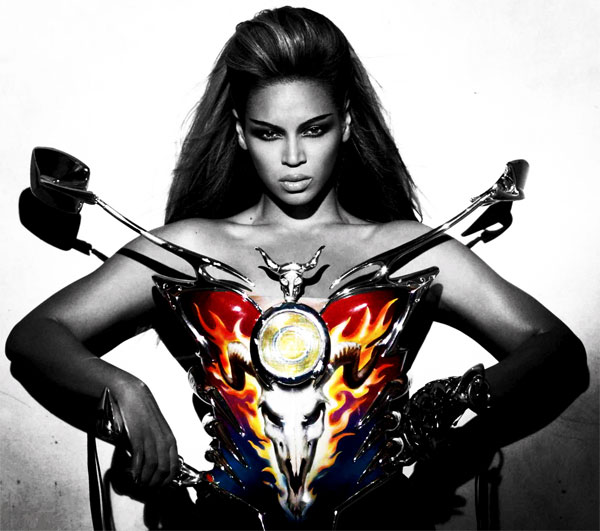 “I have someone else that takes over when it’s time for me to work and when I’m on stage, this alter ego that I’ve created that kind of protects me and who I really am,” – Beyonce is pictured here wearing the classic goat’s head symbol used exclusively in Satan worship.

Brian Wilson, considered the musical genius of the Beach Boys, claimed that he has been harassed by several different demonic spirit entities that so tormented him that he was bed ridden for years. Rolling Stone describes Wilson’s possession-like experience in ways that are reminiscent of scenes of Linda Blair from The Exorcist:

“Brian Wilson hears voices. They talk to him. They frighten him, distract him, confuse him…the voices are calling. His eyes roll toward the ceiling; they’ve gone blank. His brow is furrowed with thick worry lines. He is silent. Gone. He looks up, jerks his head back and forth for a few seconds, as if physically shaking away the voices” Former Warner Brother Records President, Larry Waronker, claims to have met at least five different entities possessing Brian Wilson’s body (Rolling Stone, August, 1988, p. 51-52).

Superstar Beyonce freely admitted to channeling a demonic spirit named Sasha Fierce, and that Sasha actually took over during her performances.

Ozzy Osborne admitted, “I’ve got many, many demons that affect me on many, many levels” (Harry Shaw, “Ozzy Talking,” p. 126). Ozzie further admitted, “I remember sitting through the Exorcist a dozen times, saying to myself, ‘Yeah, I can relate to that” (Hit Parader, Nov. 1984, p. 49).

Most people are blind to this diabolical pattern of celebrities giving themselves over to satanic power for fame and fortune, only to be exploited, used and abused, and then spit out after Satan is done with them.

Heath Ledger’s life ended prematurely not long after he accepted the evil role of The Joker in The Dark Knight. While Ledger’s depression began after starring in the gay promotional film, Brokeback Mountain, after his death, headlines from Australia’s Herald Sun like, “Tragic Death: Heath Ledger Battled His Demons” and The Star, stating “If it was personal demons that conspired to destroy Heath Ledger, they were already making their presence felt many years before,” underscored the fact that Ledger was dealing with some dark forces.

Ledger said of The Joker character he would portray in The Dark Knight,“He’s a psychopathic, mass murdering, schizophrenic clown with zero empathy.” However, to properly play the role to his satisfaction, Ledger would open himself up to evil spirits with even less empathy. “Well,” said Jack Nicholson, who had also played The Joker, “I warned him” (Source).

Unfortunately, Nicholson’s warning went unheeded and Ledger overcame his fears and ended up even meditating on becoming the evil Joker he would portray:

“I definitely feared it…Although anything that makes me afraid I guess excites me at the same time. I don’t know if I was fearless, but I certainly had to put on a brave face and believe that I have something up my sleeve. Something different…just closing my eyes and meditating on it…it was important to try to find a somewhat iconic voice and laugh. I ended up landing more in the realm of a psychopath — someone with very little to no conscience towards his acts” (Source).

Ledger told the New York Times that he “had trouble sleeping while portraying the Joker,”and that, “Last week I probably slept an average of two hours a night.” Ledger seems to have been so tormented that he told the Times, “I couldn’t stop thinking. My body was exhausted, and my mind was still going.” He went on to state that he took drugs, which would quell the unrest for only an hour (The Associated Press, January 23, 2008). Sadly, Ledger, died of a drug overdose shortly after the filming of The Dark Knight.

Robin Williams, like Morrison, Winters, Ledger and so many others who resort to drugs or alcohol in their attempt to quell the demonic voices that torment them, fail to realize – until it’s too late – that such drugs only draw one deeper into Satan’s insidious web.

Sadly, Robin Williams must have felt like he was in a no win situation. When he sought sobriety, the demonic voices which he admits he had opened himself up to likely tormented him to no end. When he sought to drown out the clamoring voices with a deluge of alcohol, he ended up poisoning himself and teetered on the throes of death. He had tried “professional help” a number of times, but the arm of the flesh, no matter how noble the intentions, cannot overcome the demonic world.

Robin Williams felt enslaved to the industry and to the very dark powers that brought him fame in the first place. An intimate friend of Williams told the Telegraph that Williams had been working on new projects and dreaded making more films to pay the bills, as they “brought out his demons” and “left him drained and particularly vulnerable to depressive episodes.”

Demonic oppression and enslavement is real, and what  happened with Robin Williams and many others is proof of that. The bible says that Jesus came to set the “captives free”.  A general belief in a generic god of your own making, a higher power, has never and will never save anyone’s soul. If the “god” you meet in rehab is not the Lord Jesus Christ, you have met a powerless idol who cannot help or save you. Don’t ever make the fatal mistake of confusing sobriety with salvation. But believing on the Lord Jesus Christ, and asking Him to wash you clean in His shed blood from Calvary’s cross will save you for all eternity.