Their favorite medium of communication for broadcasting clues about their plans is the Hollywood media industrial complex which has been producing Predictive Programming "entertainment" for the past 50 years, laced with more clues than you could shake a stick at. Today we are going to look at a few of these and let you decide for yourself.

When this episode was first broadcast in the pre-Internet wilderness of 1981, not one in a thousand Americans would have known what it was referring to.

Whatever you call them – New World Order, the Illuminati, Bilderbergs, CFR – they are all the same and all seek to achieve the same purpose. The quote by James Warburg illustrates this perfectly. A One World Government led by a single individual is exactly what the Bible said would take place in the end of time. Our time.

“We shall have World Government, whether or not we like it. The only question is whether World Government will be achieved by conquest or consent.” – James Paul Warburg, whose family co-founded the Federal Reserve – while speaking before the United States Senate, February 17, 1950

“And Jesus answered and said unto them, Take heed that no man deceive you.” Matthew 24:4 (KJV)

What all these groups are doing is setting the stage for the coming Antichrist who will deceive the whole world and force them to take his mark. Their favorite medium of communication for broadcasting clues about their plans is the Hollywood media industrial complex which has been producing Predictive Programming “entertainment” for the past 50 years, laced with more clues than you could shake a stick at. Today we are going to look at a few of these and let you decide for yourself. 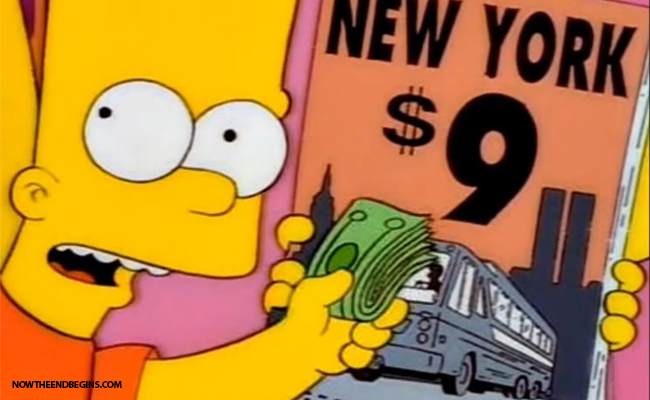 Before the Twin Towers were brought down, an episode of the Simpsons broadcast a subtle but scary warning of what was to come. Click here to see how the money in this image relates to 9/11.

When this episode was first broadcast in the pre-Internet wilderness of 1981, not one in a thousand Americans would have known what it was referring to. But in 2015, this is enough to send cold chills down your spine. An excellent example of Hollywood predictive programming making the truth seekers look like insane conspiracy nuts, and painting the New World Order masters as the good guys.

There is a ton of information and references in this clip, so make sure you watch it all the way through to the end and reserve your opinion until the powerful conclusion. The woman who produced it used a lot of sarcastic humor in her narration which tends to muddle her message a little, but this is an excellent example of NWO broadcasting of coming events.

Family Guy Predicted Bruce Jenner’s Transgender Transformation into a Woman in 2009 and again in 2011. First time was in season 7, episode 14 in the episode titled “We Love You, Conrad” which originally aired on May 3, 2009. Second time was on Sept. 25, 2011 for season 10, episode 1. Kim Kardashian’s step dad has decided to live as a woman.

10 Times the Simpsons Predicted the Future

Again, presented as humor in a seemingly meaningless and mindless cartoon series, a freakishly accurate series of references to coming events that played out exactly as they had imagined. Play very close attention to the last reference in this video.

How 9/11 was predicted in multiple cartoons

An amazingly coincidental and seemingly random sampling of references to the multiples attacks on 9/11/2001.

Not to state the obvious, but as KaBOOM! is a word used to represent loud explosions, wouldn’t they want to leave that logo at home on 9/11 – a day of horrifying loud explosions? Sometimes the Hollywood Predictive Programmers just like to mock and ridicule us as you will see in this clip of the Obamas.

This one will rattle your brains just a little, hats off to Betsy Lee McGee as her amazing investigative skills connect the dots for us.

Ultimately, what this all means is up to you, but let me just close with this. In Hitler’s Nazi Germany, they loved to taunt their victims in a satanic game of cat and mouse, it gave them great pleasure to let them know what was in store for them before it actually happened. In much the same way, the NWO – Illuminati – CFR people are doing the same thing as I feel these videos clearly show. Just go to YouTube and you will find hundreds more of these videos.

And remember this, David Rockefeller denies none of the charges against him. In fact, he freely and proudly admits that he and his families billions are indeed part of the New World Order cabal. The following is a quote from him about that:

“For more than a century ideological extremists at either end of the political spectrum have seized upon well-publicized incidents such as my encounter with Castro to attack the Rockefeller family for the inordinate influence they claim we wield over American political and economic institutions. Some even believe we are part of a secret cabal working against the best interests of the United States, characterizing my family and me as ‘internationalists’ and of conspiring with others around the world to build a more integrated global political and economic structure–one world, if you will. If that’s the charge, I stand guilty, and I am proud of it.” ― David Rockefeller