Pro-Russian protesters stormed the prosecutor's office in the separatist-held city of Donetsk on Thursday, lobbing stones and smashing windows after accusing the office of working for the Western-backed government... 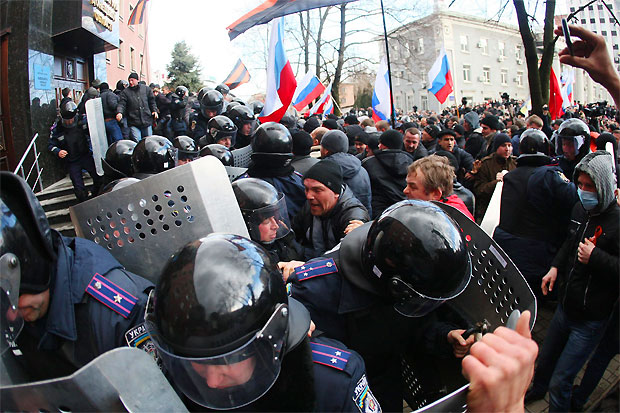 Donetsk, Ukraine: Pro-Russian protesters stormed the prosecutor’s office in the separatist-held city of Donetsk on Thursday, lobbing stones and smashing windows after accusing the office of working for the Western-backed government in Kiev.

Donetsk, a city of about 1 million people in Ukraine’s industrial east, is at the center of an armed uprising across the steel and coal belt by mainly Russian-speakers threatening to secede from Ukraine.

The violence, in a city already largely under the control of separatists, underscored the shifting security situation and suspicions in the region.

“The prosecutor’s office was issuing criminal orders from Kiev against its own people, charging them with separatism and other fake crimes,” said one protester, a 43-year-old man from Donetsk who gave his name as Igor.

Interfax-Ukraine news agency said the protesters had allowed security officers inside the building to leave, but that some were wounded. A Reuters reporter saw blood on the ground.

Pro-Russian separatists in the city have declared a “People’s Republic of Donetsk” and say they will hold a referendum on secession on May 11.

Police in the east have largely given up without a fight when confronted with protesters armed with clubs and often well-organized gunmen in masks and military fatigues. But officers often continue to work, in tacit cooperation with separatist leaders who want to maintain order. source – Yahoo News