Almazbek Atambayev has tried to dissuade women in the country from dressing in hijabs, niqabs and burkas saying: “Our women have been wearing miniskirts since 1950s, and they never thought about wearing an explosive belt.”

The president of Kyrgyzstan has said women can become radicalised by wearing Islamic dress like burkas, niqabs and the hijab.

EDITOR’S NOTE: Aside from the extreme misogynism of Islamic clothing, and the ultra-creepiness of seeing hundreds of completely covered women walking around like extras in a horror movie, Islamic clothing for women tends to bring out their violent side.  Kudos to the president of Kyrgyzstan for having the guts to bring this up. I am sure Obama will issue an immediate statement defending burkas, hijabs and the niqab.

Almazbek Atambayev has tried to dissuade women in the country from dressing in hijabs, niqabs and burkas saying: “Our women have been wearing miniskirts since 1950s, and they never thought about wearing an explosive belt.”

His comments come after several weeks of controversy following a government sponsored campaign to discourage Kyrgyz women from dressing in Islamic garb amid fears of the “Arabisation” of the country. 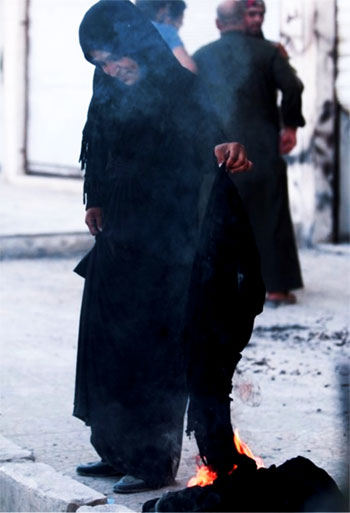 Banners across Kyrgyzstan have been erected showing women in the nation’s traditional clothing contrasted with women in niqabs and burkas captioned: “Poor people! Where are we heading to?”

Many people in the mainly Muslim country have been outraged by the campaign and pointed out that the traditional Kyrgyz “elchek” head dress is almost as conservative as the hijab. source

Civilians’ joy after being liberated from Islamic State has been caught in an incredible series of pictures.

Men are seen cutting their beards and women setting fire to burkas in the street.

Groups of women can be seen crying with relief in the street after Syrian Democratic Forces liberated the Syrian town of Manbij.

The US-backed Arab-Kurdish alliance confirmed Manbij was now “fully” under their control, ending a long battle to reclaim the city.

The town was strategically important to IS as it was close to the Turkish border and provisions and foreign fighters moved through the area.