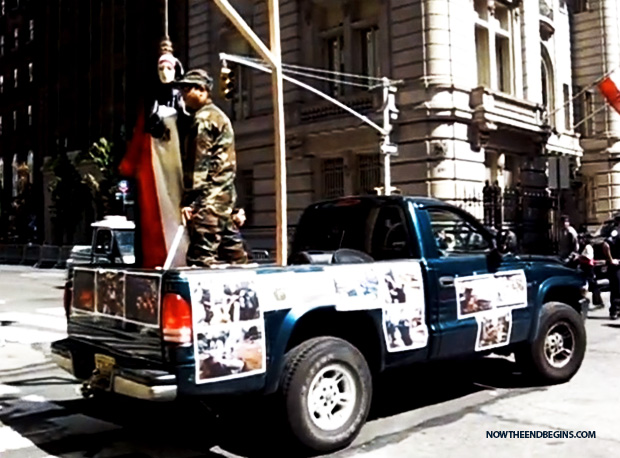 The myth of the moderate Muslim continues to explode

“For the day of the LORD is near upon all the heathen: as thou hast done, it shall be done unto thee: thy reward shall return upon thine own head.” Obadiah 1:15

“It’s just the radicals, the moderates are peaceful”, the Liberal cry, “Islam is a religion of peace!” Islam is not a religion of peace because it is not a religion at all. Islam is a submissive political ideology (the word Islam means submission) designed to weaken and destroy the “infidel” (anyone who is not a Muslim). And there is no better example of this than what happened at the 29th Annual Muslim Day Parade in New York City this past weekend.

Nothing says Islam like a helpless woman wearing a hijab and swinging from a noose.

What better time and place to show the world what you are really all about, what you really believe, than in a parade held on the busiest street of the world’s most recognized city. New York? Gather they did, and they were not shy about telling anyone within eyesight and earshot what Islam is all about, and what they as Muslims stand for. So without any further ado, here is Islam as presented by moderate Muslims on the streets of America in 2014:

Now there, don’t you agree that Islam is a religion of peace? You better, or they’ll kill you.